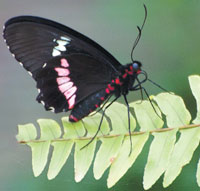 THE bright black-and-red butterflies that live on the periphery of the Amazon rain forest have developed unusual techniques of gene-swapping to survive.

Different species of the Heliconius butterfly are cross-breeding to get better wing colours, shows a comparison of their DNA codes.

This is extraordinary because genetic sharing among species, also called hybridisation, is extremely rare in the wild. It usually ends in an evolutionary dead end because the mixed-gene offspring rarely get a survival advantage.

“What we show is that butterfly species can gain protective colour pattern genes readymade from a different species by interbreeding—a much faster process than having to evolve one’s colour patterns from scratch,” says lead researcher Kanchon Dasmahapatra of University College in London.

For the study, the researchers, who published their study in Nature on May 16, first sequenced the genome of the Postman butterfly (Heliconius melpomene). They then examined the genetic makeup of two closely related species— Heliconius timareta and Heliconius elevatus—which have similar colour patterns on their wings. They found the species look similar because they share the parts of their genomes that deal with colour patterns. Wing colors are important as they help attract mates and fend off predators.

The genomes also threw up another surprise. The antennae of these butterflies have smell receptors, and their tiny feet hold taste buds. In theory, the butterflies should not be able to smell or taste very well because so much of their genetic treasure is invested in looking good for mating and camouflage.