Singur echoes in UP farms 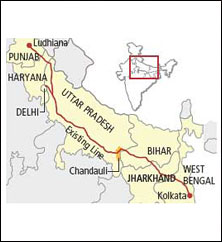 Farmers in Chandauli district of Uttar Pradesh are protesting acquisition of their farmlands for the eastern section of a dedicated freight corridor. The railway ministry plans to acquire 622 hectares in 30 villages of Chandauli.

“The soil here is fertile. Even if the government gives us handsome compensation, we would not know what to do with it,” said Alakh Mishra, a farmer of village Basni. He owns 0.5 ha and earns Rs 50,000 a year from paddy and wheat. The railway ministry is acquiring his entire village of 500 families.

Union railway minister Mamata Banerjee had assured in November that land will not be acquired forcibly, but officials served notices for acquisition in December, said Chetan Upadhyaya of non-profit Satya Foundation that is spearheading farmers’ protests along with Krishi Bhumi Bachao Sangharsh Andolan, a farmers’ body.

On December 15, Chandauli MP Ramkishan Yadav raised the matter in Parliament. Banerjee said her ministry is looking at options, including jobs to those who give their land. The ministry has land in the area which is encroached, said Shrawan Kushwaha of cpi (ml). It should evict encroachers instead of grabbing land, he said.

The ministry plans to acquire 9,000 ha for both the eastern and western corridors. The project, launched in 2007, aims to increase the speed of freight trains to 80-90 km per hour from 25-30 km per hour.