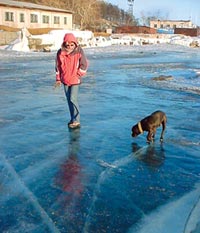 Ecologists doubt whether the World Bank's us $22.4-million loan will actually be utilised to save Russia's Baikal lake. The amount is to be spent on 'greening' the cellulose plant that drains about 115,000 cubic metres of toxic effluent, including chlorine, sulphur and dioxins, into the waterbody daily. The unit is sited along the lake at Baikalsk.

Environmentalists have long been agitating for the plant's shutdown. Greenpeace activists had earlier raised a monument to "promises not kept previously", hoping that President Vladimir Putin (who comes to ski at Baikalsk) would notice it. Ivan Blokov, head of Greenpeace Russia, feels that the World Bank loan will not achieve its objective. "The money will enable management to modernise the equipment that makes cellulose, increase its production in order to pay back the loan and the recycling equipment will not be put in place," asserted Blokov.

Sources at the World Bank deny any possibility of such misuse of funds. The bank is also financing a us $85-million project to revive the disappearing Aral Sea's northern part -- known as Small Sea.