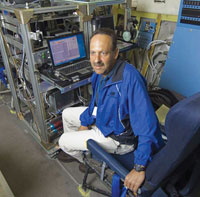 RAIN comes from clouds. But where do clouds come from? Through the process of evaporation and transpiration, water vapour rises higher into the atmosphere, deposits on fine particles, such as dust, air pollution, pollen and bacteria, condenses and forms the cloud.

These particles called aerosols act as a seed to unite tiny water droplets, which coalesce to form raindrops. Weathermen call them cloud condensation nuclei or ice nuclei. But not all aerosols floating in the higher altitude help in the formation and precipitation of cloud.

After studying clouds for 14 years, a team of scientists led by Paul DeMott with the Colorado State University in USA have concluded that based on the size, only one in a million of aerosols acts as ice nucleus.

His team used specially designed planes to collect air samples from in and around clouds from the Arctic to the Amazon. They measured in real-time the ice-forming ability of aerosols in the air surrounding growing clouds and subsequently the total number of ice nuclei present in the cloud wave. After evaluating 14 years of data, the scientists said the amount of ice nuclei necessary to form cloud is linked to the abundance of aerosols larger than 0.5 μm (a millionth of a metre) in diameter. There was an exception, though. Sea-salt aerosols of super-micron size do not act as ice nuclei, the scientists noted in the Proceedings of the National Academy of Sciences on June 22. They plan to study the anomaly.

The reasearchers cautioned unregulated release of aerosols into the atmosphere may lead to erratic rainfall patterns due to shrinking of rain drops and disturbance in rain cycle (see ‘Aerosol pollution may affect rainfall pattern’, Down To Earth, February 2007).