Skeletons in the closet 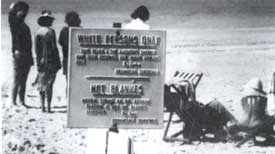 several horrors from South Africa's apartheid era are gradually coming to light. During a recent testimony before the country's Truth and Reconciliation Commission (trc), several witnesses revealed how undetectable ways of murdering political opponents figured high on the priority of chemical and biological warfare campaigns.

Millions of dollars were spent in developing high-tech gadgets to brutalise or kill anti-apartheid activists. These included a range of lethal screwdrivers with tiny poison-filled cylinders, peppermints spiked with botulism, vials of liquor laced with poison, and many more.

The extent of South Africa's chemical and biological programme and whether it included weapons of mass destruction still remains unknown, but the hearings have offered a detailed picture of these programmes, code-named Project b or Project Coast. It was headed by Wouter Basson, once the personal doctor of former South African president P W Botha. Today, Basson faces several criminal charges, including fraud and theft.

The hearings have revealed that the apartheid regime had even attempted to develop bacteria that would selectively kill or injure black people, leaving the white people unharmed. Scientist Dan Goosen, who headed a covert military research laboratory under Basson's control, told the trc that readings and scientific literature led him to believe that it could have been a feasible project. Selectively destructive bacteria, Goosen said, could have been used domestically as a threat to keep the white government in power.

Goosen, who acknowledged that in hindsight his work was not justifiable, said that the prospect of maintaining order amid an increasingly black population during apartheid's most trying days gave impetus to Basson's work.

More witnesses, such as bioengineer Jan Laurens and Schalk van Rensburg who worked in Roodeplat Research Laboratories, a front for the biological and chemical weapon campaigns, described how they had devised ways of killing unsuspecting black leaders and activists. It included chocolates and cigarettes infected with anthrax and beer bottles containing salmonella bacteria.