Bed bugs continue to be the most difficult pest to exterminate

BED BUGS seem unthreatening at their 5mm length, but the harm they inflict is by no means small. Placed above cockroaches and termites as the most difficult pest to exterminate, in a survey by the National Pest Management Association in the US, the blood-sucking insect can cause severe skin rashes, allergies and even psychological trauma.

These are wingless ectoparasites (those that live on a host’s body) that feed exclusively on blood. Though different species are found on different vertebrate hosts, like bats and birds, it is the tropical bed bug, Cimex hemipterus, and the common bedbug, C lectularius, of temperate regions that we find in our homes. Bed bugs were a major public concern until the 1950s but mid-20th century witnessed a decline in their populations, attributed mainly to increased pesticide use. However, a ban on chemical insecticides and development of insecticide resistance led to their resurgence in the late 1990s. The degree of the resurgence was probably due to poor pest management, says Stephen Doggett, a senior entomologist at Sydney’s Westmead Hospital, popularly known as Australia’s Mr Bedbug.

The resurgence has excited scientific interest in the biology, behaviour, population analysis, insecticide resistance mechanisms, monitoring tools and control of bed bugs across the globe. A bulk of the research is, however, directed towards understanding the ecology of the insect and exploiting that information for competent pest management. One such topic of research is how bed bugs “sniff out” their hosts. This information can be potentially helpful for making bed bug traps, like those used for mice. A February 2012 paper published in Journal of Experimental Biology by scientists from the Lund University, Sweden, showed that bed bugs are attracted by body odour of a sleeping individual, in addition to the known cues: carbon dioxide and warmth. Surprisingly, it was not human-specific compounds in body odour that attracted bed bugs, but compounds common to all vertebrates.

Scientists at Lund University believe chemical cues between bedbugs can help control the notorious pest. Bedbugs mate by the process of ‘traumatic insemination’, in which the male pierces the abdomen of the female with its genitalia and deposits sperm directly in the abdomen. Sometimes nymphs (immature bedbugs) fall prey to such unwanted advances and are left severely wounded. Under stress, bedbugs release volatile chemicals called ‘alarm pheromones’ as a protective mechanism. In a March 2011 paper published in PLoS One, Jette Knudsen and colleagues showed that alarm pheromones released by tropical bedbug nymphs are a strong repellent to other bedbugs. This study built on another study on the common bedbug by Joshua Benoit and colleagues from Ohio State University, published in Journal of Medical Entomology in May 2009. For their study, they added alarm pheromones to desiccant dusts such as silica gel. Desiccant dusts are one of the few effective control measures against bed bugs. The researchers found the efficiency of desiccants increased 2-times by addition of pheromones as they lured bedbugs out of their hiding places, increasing their exposure to desiccants.

Awareness regarding health and environmental risks associated with chemical pesticides has prompted researchers to find organic alternatives. Scientists at the Pennsylvania State University in the US have found that a fungus, Beauveria bassiana, can act as a highly effective biopesticide against bed bugs. Though the results of their study, published in April 2012 in Journal of Invertebrate Pathology, are optimistic, the researchers need to test how efficiently the fungus works in real-life conditions. Similar fungi are used extensively in agriculture and horticulture, and are effective against mosquitoes and ticks. 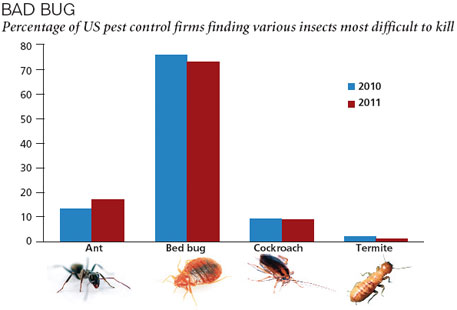 The extent of the bed bug menace has led to a proliferation of extermination solutions, some suspected to be fraudulent. One example is an electronic device said to repel insects using ultrasonic frequencies. It has already been shown to be ineffective against mosquitoes, cockroaches and ants but was still claimed to be effective against bed bugs. Researchers at the Northern Arizona University experimentally tested four such acoustic repellent devices for their study, published in December 2012 in Journal of Economic Entomology. They found the bugs are neither repelled nor attracted by the devices.

As the West keeps busy regarding this public health nuisance, no such attention is being given to bed bugs in India. A lack of advertisements targeting bed bugs suggests mosquitoes, cockroaches and rats take precedence as domestic pests here. This, however, does not mean the country is bug-free. “On the contrary, bed bugs are a problem across the tropics, including India. There is not as much information on bed bugs in developing world as they do not rate as an immediate concern compared to vectors like mosquitoes,” says Doggett.

Regardless of the concerted effort to solve this problem, Doggett is not very optimistic about the future. “As pest control technicians become better trained in controlling bed bugs, there would be a decline in infestations in the wider community. “However, the problem I see, and this is happening, is that bed bugs will become entrenched amongst the socially disadvantaged as this group does not have the money to pay for bed bug control. This means that the poor will likely become the reservoir for bed bugs,” says Doggett. While research into more effective and cheaper control solutions is an important step towards a solution, development of an industry-standard ‘best practice’, and educating all stakeholders, including pest managers and the accommodation industry, of this ‘best practice’ are equally central measures for getting rid of bed bugs.