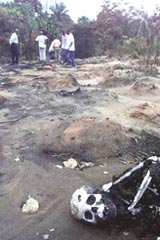 Oil major Shell has decided to publish details of its payments made to the Nigerian government, which amounted to us $900 million last year, following a campaign by human rights groups and the uk to reduce corruption in oil and mineral-rich developing countries.

Meanwhile, more than 100 people were killed in a petrol pipeline explosion in southeast Nigeria recently. Most of the deceased were villagers scavenging for oil at a rupture made by thieves.

According to officials, the blast was caused by sparks from a motorcycle that was carrying stolen petroleum from the pipeline. Similar explosions have killed hundreds of Nigerian villagers in the past. Most of the accidents occur during pilferage and transportation.