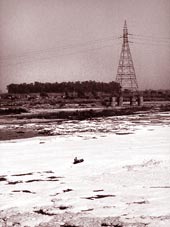 cleanup campaigns notwithstanding, why does Yamuna river remain brimful with pollutants? According to the Central Pollution Control Board (cpcb), this is because only 45 per cent of the total sewage generated in Delhi gets treated. The board recently submitted a status report on sewage treatment plants (stps) to the Supreme Court (sc). The document notes that out of 3267 million litres per day (mld) of sewage generated, only about 1478 mld is being treated by the 30 stps built at 17 locations in the capital.

The sc had directed the cpcb to inspect Delhi's stps in September 2003, while hearing the case on the contamination of the Yamuna. The board examined the plants in November-December 2003. It found that the actual treatment of sewage during the period was only about 63 per cent of the total treatment capacity of 2330 mld.

The report observes that 20 stps are running below their capacity and three are non-functional. Two plants are operating satisfactorily, while the performance of five is above average. Many plants are under-utilised due to choked sewers and faulty pumps or connections. Even the plants with ample treatment capacities are not getting enough sewage due to poor management and planning. In this regard, the cpcb cites the examples of stps at Rithala, Narela, Rohini, Ghitorni, Mehrauli, Yamuna Vihar and Kondli.

The board has suggested that the capacity of the plants be enhanced at Sen Nursing Home and Delhi Gate. "At present, these two stps are treating only about 15 per cent of the total wastewater passing through drains. The rest is being discharged into the Yamuna without any treatment," points out cpcb additional director R C Trivedi.

The status report also states that the locations of the stps are not in accordance with sewage generation. Besides, the operation and maintenance of interception of sewage from sewer lines and pumping stations are poor. Another flaw is that the sludge generated from the stps is not lifted fully from the drying beds. As a result, it gets mixed with treated effluents and flows into the Yamuna.