Expert committee report crawls only after a protest 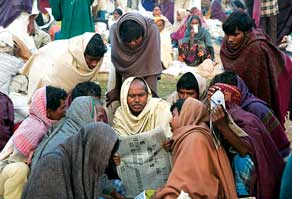 over 5,000 tribals from 15 states marched to Delhi in October to protest the delay in the countrys land reforms policy. The protest happened eight months after a committee submitted its report to prime ministers office (pmo). The committee hoped its recommendations would be part of the national land reforms policy, but the report was in cold storage till the October protests.

Two years ago, 30,000 people had walked to Delhi to demand land rights. To pacify them, the pmo formed the committee with the Union minister for rural development as the chairperson. It was to look into the unfinished task of land reforms and submit a report to a National Council for Land Reforms, both formed in January 2008. But the council did not receive the report till last month.

The report of the committee could remain a policy paper, said Walter Fernandes, member of the National Council on Land Reforms. The government will need to work against internal pressures and pressures from the World Bank, which wants computerization of existing land records. That would legalize all land acquisitions, without giving rights to tribals, landless and the dalits, he added. For example, in Jharkhand land records date back to the 1960s and the 1930s in Orissa.

The committees radical report emphasized updating land records among other things (see box). It could sound radical because the report brings different land right acts that have been there for the past 30-40 years. These should be implemented properly, said Pravin Jha, a committee member. The director of the Council for Social Development, T Haque, stressed that the report might be radical but the government might go soft, so social organizations must keep up the pressure.

The committee cited several instances of land grab and dishonoured land deeds to support its recommendations. For example, the report said that villagers in Andhra Pradeshs Medak district were given land deeds under the prime ministers land distribution programme in 2005. The compensation, for cultivation, never reached the villagers. Legally, if land remains uncultivated for three years, it goes back to the government. In another instance, in Andhra Pradesh, land deeds were given in what turned out to be a reservoir. The reservoir has still not dried, said committee member Ramesh Sharma. He added the survey and settlement divisions of most state revenue departments were defunct. In most cases, land that had been allotted was not demarcated.

Land reform can be done only after policies are in place. States are talking about land reforms but they have not stopped signing MoUs with companies, said Fernandes. Acknowledging that the law did not always operate to the advantage of the tribals, the committee hoped it would be instrumental in providing a policy framework for action on land rights by the Centre, state and panchayati raj institutions and accountability at each level.

Till then, the only hope for tribals is a fresh promise and a new deadline from the pmo: action on the land reforms policy within 100 days, starting October 29, 2009.