Slow off the mark

Discussions begin on norms for soft drinks, but urgency lacking 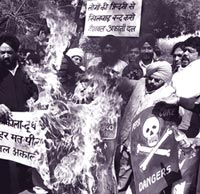 while the Joint Parliamentary Committee's (jpc) report on pesticide residues in soft drinks has set in motion the process of fixing standards for aerated water, the concerned authorities seem to have charted a circuitous route to achieve the same.

The jpc had tabled its report in parliament on February 4, affirming that the Centre for Science and Environment's findings about the presence of pesticide residues in soft drinks were correct (see: 'A lie is nailed', Down To Earth, February 29, 2004). Consequently, Union health minister Sushma Swaraj announced that the panel's recommendations would soon be implemented in letter and spirit.

On February 13, the Central Committee for Food Standards (ccfs), which comes under the health ministry, held a meeting and lauded the jpc report. The ccfs accepted the need for setting "composite standards" for pesticide residues in soft drinks. But rather than adopting an expeditious approach to establishing final product norms, it decided to refer the matter to its pesticide residue sub-committee. This body may co-opt more experts from the Bureau of Indian Standards (bis) and other organisations before mulling over the issue. The ccfs has also proposed the setting up of a national-level expert committee, comprising four to five members. The objectives of the panel would be to guide the pesticide residue sub-committee as well as study and evolve standards for all food contaminants, including pesticide residues.

Significantly, the ccfs has unanimously suggested that the new norms for bottled water should be applicable for input water used to manufacture soft drinks. This was one of the major recommendations made by the jpc. For the consumer, this means that the water used as raw material to make soft drinks will be as clean as packaged drinking water.

It may be noted that the bis finalised the remaining standards for bottled water at a meeting on February 11. The bureau set stringent norms for arsenic and fluoride. The meeting was a stormy affair, with industry representatives making a last-ditch bid to scuttle the process. However, the bis panel rejected most of the industry's arguments.

In the ccfs meeting, the need to have separate norms for other inputs like sugar was also expressed. According to a ccfs member, it has been proposed that consultations be started for arriving at the standards for these ingredients.

Though the ccfs took some decision regarding separate norms for fruits juices and other similar products, the details have not been divulged yet. The jpc had observed that the standards for soft drinks should be different from those for fruit juices, since the latter have a nutritive value.

"The government must provide an action taken report to parliament within 4-5 months," says Sanjay Nirupam, a member of the Rajya Sabha. He was also a member of the jpc on soft drinks. Meanwhile, all eyes are now on the ccfs' pesticide residue sub-committee which is expected to decide on the much-needed final product standards.