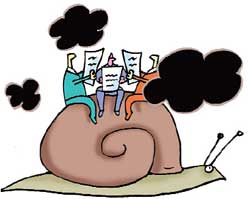 the latest round of consultations on climate change held in the German city Bonn between August 10 and 14 ended in disappointment. The 199-page negotiating text with more than 2,500 brackets was the only highlight of the meet. The lack of progress has raised concerns that finalizing a comprehensive deal in Copenhagen in December to replace the Kyoto Protocol, expiring in 2012, may be unrealistic.

The informal talks under the UN Framework Convention on Climate Change (unfccc) were intended to cut down the text, dubbed the brick. The text was consolidated during the talks in Bonn in June. "Selective progress has been made," said Yvo de Boer, executive secretary of unfccc. "At this rate we are not going to make it," he warned.

Differences on the text crept in as developed countries wanted to streamline the text and do the in-depth discussions at the next round of talks in Bangkok in late September while developing countries wanted more debate on the text. Some felt their submissions have not been included in the text. Funding for climate change mitigation and adaptation projects in developing countries remained the main stumbling block. China, in a formal submission, said developed countries should not resort to measures such as imposing carbon tax on goods and services from developing countries on grounds of protection and stabilization of climate. India also submitted a similar proposal. But some industrialized countries did not see the need of including the proposal in the text saying it would make the text even more cumbersome. Concerns were also raised on the post-Kyoto targets of emission reduction by industrialized countries, but no consensus could be reached.

"A climate deal in Copenhagen this year is an unequivocal requirement to stop climate change from slipping out of control," said de Boer. But with differences in the talks preceding Copenhagen, he said, it seems the Copenhagen outcome would at the most remain a skeletal agreement with details left to be finalized later.