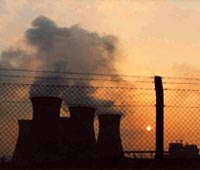 The uk has permitted power plants and factories to emit more carbon dioxide (co2), announcing a stricter emission reduction target but raising its estimate of the amount of co2 to be emitted in the coming three years without emission cuts.

In April 2004, the government said it expected co2 emissions from industries covered under the eu's emissions trading scheme (ets) to be 736.3 million tonnes without emission cuts. The ets is part of the eu initiative to control global warming and fulfil the requirements of the Kyoto Protocol. The government said it planned a 0.7 per cent reduction in the total. But On October 27, 2004, it announced that it had re-estimated the "business-as-usual" figure at 792.4 m tonnes and wanted a 5.2 per cent reduction in it. Thus, the new target is 756.1m tonnes, almost three per cent more of the original figure.

"We are balancing the need to protect competitive edge while moving us beyond our Kyoto Protocol commitment towards tougher national goals," said Margaret Beckett, secretary of state for environment, food and rural affairs. Friends of the Earth said the move reflected "a typical lack of political will" to curb emission of greenhouse gases.