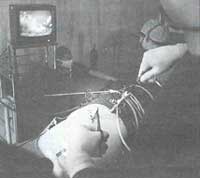 TILL a few years ago, all abdominal surgeries left the patient with a long scar. But thanks to laparoscopy -- a surgical technique that obviates the need to cut open the abdomen -- most patients can now leave the operating table without carrying the ugly legacy of the surgeon's scalpel.

Now, an Indian physician has extended the repertoire of laparoscopy to the dangerous territory of the chest. Says Arun Prasad, who claims to have performed the first operation of this kind in the world, "Operating on the lung using this technique is like a double-edged sword, for there is a constant danger of the respiratory organs getting damaged."

Besides leaving the patient scar-free, laparoscopy scores over conventional surgery in 2 important ways -- it is far less bloody and no muscles are severed, leading to a faster recovery.

Using laparoscopy for gall bladder operations is now routine the world over -- in the US alone, it's performed 600,000 times a year. The operation begins with putting a tube through the navel and inflating the abdomen like a football. Then the surgeon punches 2 more holes -- 0.5-1.0 cm in diameter -- close to the organ to be worked on using thin, tubelike devices called trocars.

Depending on where the organ is, the surgeon puts a laparoscope -- basically a computer-chip camera -- into one of the trocars to view on a television monitor what's going on inside the patient's body. An assistant feeds a long-handled instrument through another trocar, with which any organ can be held in place. The surgeon works through the 3rd trocar, using scalpels and clippers to cut into fatty tissue, or a crusher to grind stones lodged in the gall bladder.

Prasad's patient was a young girl with a cyst under her lung. Conventional surgery would have marred her for life, remarks Prasad; so he decided to take the risk of removing the offending object using laparoscopy. "I warned them however that the odds were 50-50, but luckily for her and us, it went off very well," he says.

The operation involved inflating the cyst and then sucking out the poisonous fluid from it. After the operation, the girl was required to stay in the hospital for just 2 days, as against 3-4 weeks after the conventional operation. This offsets the higher cost of this specialised operation, making it about as costly as the latter.

Although laparoscopy is becoming increasingly popular and mundane, it's not without its difficulties. Explains Prasad, "First of all, surgeons complain of loss of stereoscopic vision, meaning the TV view is only 2-dimensional. Furthermore, a surgeon used to the conventional method of surgery finds it not a little awkward using unwieldy instruments and having to always look at the screen to know what he or she is doing."

Western scientists are now devising new techniques to aid laparoscopy, such as using virtual reality to construct on the screen a 3D-view of the organs.