The tax liability of New Zealand's farmers is set to rise because their bovine assets -- hold your breath -- belch and break wind! 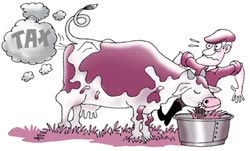 the tax liability of New Zealand's farmers is set to rise because their bovine assets -- hold your breath -- belch and break wind!

That cattle discharge methane (a greenhouse gas) while performing these natural bodily functions is not news. The subject of 'survival emissions' from livestock in developing countries has also been debated threadbare. What is unprecedented is an industrialised nation like New Zealand deciding to impose a levy on cattle and sheep to fund research on curbing methane emissions from the animals.

Not surprisingly, the country's farmers have kicked up a stink. Dubbing the proposal as the "fart tax" plan, they have got their message across by despatching manure through post to the prime minister, agriculture minister and climate change convener. But the government, far from being cowed, is in no mood to backtrack.

The proposed tax, which was announced in June 2003, comprises an annual levy of 72 New Zealand cents (us $0.43) per head of cattle and 9 New Zealand cents (us $0.05) on each sheep. Pigs and poultry have been exempted since their emission levels are negligible. The tax is expected to generate us $4.9 million annually. New Zealand intends to introduce it as a part of its effort to reduce greenhouse gas emissions under the 1997 Kyoto Protocol.

On July 15, 2003, agriculture minister Jim Sutton asserted: "The issue now is not whether there will be a levy. The question is how the levy will be collected, who will administer it and how it will be spent." Sutton was speaking at the annual conference of Federated Farmers (ff) in Auckland. Justifying the move, he mentioned the recent waiver granted on charges pertaining to other farm emissions.

For its part, the federation -- a national organisation of over 18,000 farmers -- passed a resolution directing the agriculture industry not to collect the levy on behalf of the government. Meanwhile with the farming community taking to the streets, ff's Southland president Lionel Patterson feels the nationwide agitation could snowball into something similar to the farmers' revolt of 1986 against the then government's fiscal policies. "It (the proposal) really amounts to the authorities saying: 'You don't support us, we don't like you and you will pay accordingly'," says an editorial in The National Business Review . It suggests that the ruling party is "punishing" farmers since they form a strong support base of the National Party -- the mainstay of the opposition.

According to Jeff Grant, chairperson, agro-sector group Meat New Zealand, meeting Kyoto commitments will benefit the entire country so the government itself should fund the research in public interest. The farm sector is already said to be doing its bit by investing in studies to mitigate emissions from livestock through the Pastoral Greenhouse Gas Research Consortium, an industry-led collaborative venture established in December 2002.

Imposing such a tax will get in the way of the country's competitive advantage, avers Ivan Lines, president of New Zealand Institute of Primary Industry Management. It may be noted that dairy and meat exports make a substantial contribution to New Zealand's economy. Farmers argue that if they are to be taxed for the natural activities of farm animals, they should also get the benefit of sequestering carbon dioxide by trees on their properties.

But there are those who support the government's move. "The farmers are implying that somehow when it comes to them, the 'polluter pays' principle does not apply," observes Cath Wallace, chairperson of an umbrella group of environment and conservation organisations in New Zealand, in a media release. About 40 per cent of the country's total greenhouse gas emissions are due to methane released by ruminants. The animals include 46 million sheep and nine million cows. The situation is unique to New Zealand because in other industrialised nations energy production and industrial activity are the major sources of pollution.

Experts opine that nutrition as well as the animal's bodyweight and size play a major role in emission of the gas. The rumen of cattle contains a large number of microorganisms that break down the consumed plant material, mostly grass, through fermentation. Methane is released in the process and discharged into the atmosphere by the animal. In the eu, infusion of a dose of methane-eating bacteria reduces emission of the gas from sheep by up to 17 per cent.

For the present, the two sides continue to lock horns on the tax proposal. Even as the New Zealand government has made it clear that it means business, farmers are determined to prove that their stir is not just hot air either.