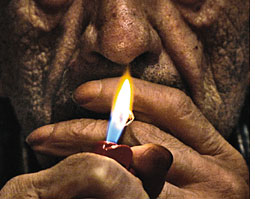 with each puff of cigarette smoke, one may add on a few virtual years. Scientists have discovered that the smoke suppresses a gene that prevents premature aging. The gene, called sirutin or sirt 1, also plays an important role in stress resistance and metabolism, and hence these functions also suffer. sirt 1 belongs to the class of genes that regulate chronic inflammation, chronic obstructive pulmonary diseases (copd) and cancer.

Researchers from the Department of Environmental Medicine, Rochester University, usa, studied 4,700 toxic chemical compounds in cigarettes. Lung samples of smokers and nonsmokers were studied. The study showed that sirt 1 gets damaged due to the toxins and hence smokers had a higher risk of contracting the diseases.

"When exposed to smoke, the gene loses the power to monitor a complex protein in the cell. The protein, called nuclear factor-kappa b, thus gets a freehand to cause inflammation of the lungs. Chronic inflammation causes lung cancer and copd," says Irfan Rahman, the lead researcher. Rahman adds that toxic chemicals in the environment could also affect the functioning of the gene. The study also indicated that it was not possible to revive the gene even if one gave up smoking. The study was published in the January 3 online edition of American Journal of Respiratory Critical Care Medicine. Earlier, the researchers had studied another gene, nrf2, which regulates the antioxidant glutathione and is also affected by smoke and other pollutants. " W hile n rf2 increases antioxidant genes, sirt 1 decreases inflammatory genes," says Rahman.

The study holds promise but it is still too early to comment on the outcome, says S K Chhabra, head, Department of Cardiorespiratory Physiology, Vallabhbhai Patel Chest Institute, Delhi. Others feel a specific treatment strategy could be developed. "This is an important study to understand the persistent lung damage and inflammation that occurs in patients with copd and therapies can now be directed towards the gene," says James D Crapo, professor of Medicine, National Jewish Medical and Research Centre, Colorado.

The researchers are currently working out a solution to reverse lung damage and speed up copd therapies. They are developing a chemical which is naturally derived from red grapes and has been attributed with anti-cancer, anti-aging and anti-inflammatory properties.