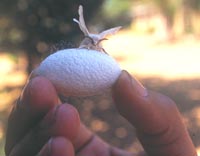 Scientists have struggled for years to understand how the lowly silkworm spins the strongest natural fibre known to human beings. Now they have cracked the mystery. The secret is the animal's ability to carefully control the water content in its silk glands.

Scientists have known for some time that silk's impressive strength arises from a mix of proteins with various properties. But how silkworms and spiders convert solutions containing these proteins into silk threads without clogging their silk glands was unclear. David L Kaplan and Hyoung-Joon Jin of US-based Tufts University dissolved silk from a cocoon and removed the compounds responsible for gluing the fibres together. They then examined how the remaining proteins behaved in the presence of various amounts of water. They found that as the water level lowered, tiny islands of solid proteins began to form. As more water was removed, these so-called micelles joined together to form larger gel-like structures ranging between 100 and 200 nanometers in diameter. This aggregation allows the proteins to stay soluble and avoid premature crystallisation. If the proteins were to become solid too soon, they could permanently block the spinning system, with potentially fatal results. The silk proteins arrange their hydrophobic (water fearing) and hydrophilic (water loving) parts in such a manner that they remain soluble prior to being spun.

"The finding could lead to the development of processing methods resulting in new high-performance materials used for biomedical applications, and protective apparel for military and police forces." More importantly, the findings could help the artificial silk manufacturing units of countries like India, which is world's second largest producer of silk.