Plan to evacuate Jharia residents: more to it than underground fires? 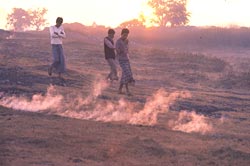 the underground fire has resurfaced as a raging row in Jharia, a small industrial town near Dhanbad in Jharkhand. What has stoked the controversy afresh is state chief minister (cm) Babulal Marandi's announcement that nearly 0.3 million people would be evacuated from the area. Local leaders, irrespective of their political affiliations, are opposing the state government's move. It is alleged that the decision has been influenced by Bharat Coking Coal Limited's (bccl) keen interest in displacing people to extract buried coal. When contacted, authorities of bccl, a public sector undertaking, refused to comment.

The issue has created a rift within the ruling party itself. State science and technology minister Samaresh Singh and urban development minister Bachcha Singh have severely criticised the cm's statement. While the local Bharatiya Janta Party (bjp) and Samata Party leaders are guarded in their reaction, the opposition leaders are openly critical about the move. A K Baksi, a labour leader of Centre for Indian Trade Unions (citu), a Marxist trade union and, a frontline advisor of 'Jharia Coalfield Bachao Committee, a non-political body constituted to fight for the cause of the Jharia residents says, "The government is well aware that it neither has the financial means nor the land within Dhanbad to go ahead with mass relocation of the people. It has even decided to discontinue the JhariaPatherdih railway services. This is yet another step to force people to leave the town. " A K Roy, former member of Parliament from the Marxist Coordination Committee, feels that the move is "uncalled for" and "the poor people will face maximum distress in case of any large-scale evacuation".

According to a recent report by bccl, the first underground fire was reported in the area in 1916. Once the fire originates it becomes difficult to control the blaze as both coal and oxygen -- which fuel it further -- are available aplenty in the area. Though a number of experts, including international consultants, have worked on the problem of the Jharia fire in past 20 years, no concrete solution has been arrived at yet. "The only way is to cut trenches to discontinue the fire seams (coal layers). But this requires a lot of money," says M M Sharma, deputy director (mine safety).