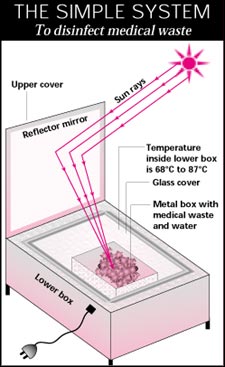 a simple innovation might bring respite to those struggling to manage medical waste in an ecofriendly manner. Vikrant Chitnis, a senior research fellow at Indore-based Choithram Hospital and Research Centre, has developed a system that disinfects medical waste by exposing it to the sun's rays (which are capable of destroying harmful bacteria). As per Chitnis, the system is cost-effective. The World Health Organization and the us-based coalition group Health Care Without Harm have recently awarded the method for being the best non-burn technology.

The system functions simply -- medical waste is fed into a solar box, which is made of aluminium sheets. The box is divided into two sections: the upper cover and the lower box. The upper cover supports a reflecting mirror and the lower box has a metal container in which the waste is put. The box also has a lining of 'glass wool' in the base, a rubber lining on the sides and a glass sheet on the top. The mirror reflects solar energy on the metal box; this increases the container's temperature and thereafter the disinfection process starts. The glass cover, wool and the rubber lining also help in increasing the temperature. According to Chitnis, the disinfection process starts at 70c.

During experiments, the solar box was preheated for three hours. Thereafter, medical waste, consisting of cotton, gauze pieces, plastic disposable syringes and plastic tubings (tubes), was fed into the box along with 1-1.5 litres of water. The water was added because it acts as a good conductor of heat. The box was exposed to sunrays for six hours. Chitnis found that the temperature of the metal box ranged between 68c and 87c. During summers, it even touched 100c. "We found there was a reduction of about log 7 in bacteria; this means that if there are 109 bacteria per millilitre (ml) of waste, after solar disinfection they are reduced to 102 per ml of waste. "The technology is unable to completely kill the bacteria. But it reduces their presence significantly, making the waste non-infectious," explains Chitnis, adding: "This level of bacteria reduction is satisfactory. The disinfected waste can be safely dumped in landfills or given away to municipalities after shredding."
Solar disinfection can particularly prove beneficial for developing countries, as most of them receive sunshine throughout the year. Moreover, the technology it is economically viable. As per the paper, 'Solar disinfection of infectious medical waste', published in The Lancet (Vol 632, No 9392, October 18, 2003), the cost of solar disinfection for 10 kilogrammes of waste is us $37 -- a paltry amount compared to the cost incurred using an incinerator (us $41,670), microwave (us $13,000) or hydroclave (us $68,750). These conventional technologies also mean incurring operational cost for the fuel.

The solar box can also installed anywhere. Therefore, it is a viable option for rural areas, where at present there are no systems for safe management of medical waste. "... (This) option fits into the rural operations, as they are cheaper to operate, environmentally safer and do not require skilled manpower or electricity," states a factsheet prepared by Toxics Link, a New Delhi-based non-governmental organisation (ngo). "Solar disinfection indeed is promising and we are studying it at the field level," says Ratna Singh of Srishti, a New Delhi-based ngo.

But the technology may prove unviable for large-scale operations of hospitals, as it has a limited capacity of 10 kilogrammes. Some experts are also critical of the fact that the system only inactivates vegetative bacteria like Pseudomonas aeruginosa, Klebsiella spp, Escherichia coli, Staphylococcus aureus, and enterococci; it is unable to kill thermoduric spore bearing (heat-resistant) bacteria. The system cannot even treat human and animal waste. Moreover, during winter and the rainy season, it may be rendered non-functional due to the absence of adequate sunlight.

Chitnis says this drawback can be overcome by using a small heating system. He, however, acknowledges the other shortfalls. "Soon we would be field testing this technology on a largescale. But government agencies should come forward to make this technology viable. The Central Pollution Control Board and the Union ministry of non-conventional energy sources should take a lead role," adds Chitnis. The field trails are expected to start within two months. If this technology proves to be commercially viable, it would help in safely disposing of the waste of the primary healthcare centres. But will official support be forthcoming?