Solid biomass as cooking fuel is a killer

Use of biomass takes high toll 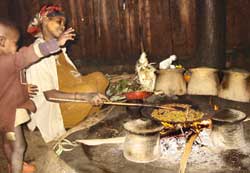 As many as 500,000 women and children die in India each year due to indoor air pollution caused by use of solid biomass as cooking fuel, according to the World Health Organization (WHO). The poor in India, who form the majority of the population and live in congested, slum-like conditions, are exposed to much higher levels of pollutants than poor people in neighbouring countries, it adds.

In a report on indoor pollution in southeast Asian countries released recently, WHO estimates that 1.6 million of almost 3 billion people who use solid biomass as cooking fuel die every year. It found that use of unprocessed biomass fuel such as dung, wood, charcoal and crop residues puts almost 90 per cent of the rural population in developing countries at risk.

Studies have shown that incomplete combustion of solid biomass fuels increases the levels of indoor air pollutants such as particulate matters and noxious gases such as carbon monoxide. Another by-product is fine soot particles that can penetrate deep into the lungs and cause inflammation of airways and lungs, resulting in acute respiratory diseases and lung cancer. Exposure to these substances is more likely to lead to lung cancer than even tobacco smoking, the WHO report suggests.

Other than the adverse health effects, WHO says that use of biomass releases gases that lead to global warming. It says use of biomass fuels should be minimised and safer alternatives like LPG preferred.