A new battery, made only of solid materials charges into the market 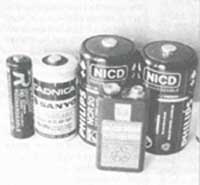 AN AMERICAN company, Ultralife Batteries, has launched the world's first lightweight rechargeable battery made entirely from solid materials. The battery, launched a few weeks ago, can be recharged more than 1,000 times with only a tiny loss of capacity. In comparison, conventional batteries can be recharged a maximum of 200 times (New Scientist, Vol 146, No 197 1).

Being completely solid, Ultralife batteries can be shaped to suit any size to power portable equipment such as laptop computers, camcorders and mobile telephones, or if current research efforts succeed, even automobiles, according to Colin Newnham, the vice-president of rechargeable product development at Ultralife. The batteries can be made thinner than a millimetre and with as large an area as that of an A4 sheet of paper.

Unlike conventional nickel-cadmium, rechargeable batteries, which contain liquid electrolytes, Ultralife batteries contain lightweight lithium-based electrodes and a solid polymer electrolyte - whose exact composition is a closely guarded secret. As it is entirely solid, there is no danger of any chemicals leaking out. The manufacturer says that the safety factor of the batteries on this account gives them an edge over Japanese companies, including Sony, Sanyo and Matsushita, which have launched rechargeable lithium ion-based batteries, but with liquid electrolytes.

The new battery is known as "rocking chair" or "shuttle -cock" cell, because it relies on lithium ions passing to and fro as it is charged and discharged. While discharging, lithium ions migrate from the flat carbon anode, cross a layer of polymer electrolyte and combine with the cathode material on the other side to form lithiated manganese oxide. Sheets of metallic mesh on the top and the bottom of the cell act as current collectors. Recharging reverses this process. The cell is sealed in laminated aluminium foil to keep the moisture out.

Ultralife will soon be supplying an unnamed multinational communications company with the first commercial version of the battery, for use in ,d mobile phones. Newnham says that the new batteries would cost around us $1 per watt-hour - the same price as energy from nickel-cadmium rechargeable batteries. He expects the product to undercut other lithium-based rechargeable batteries as it uses cheaper lithiated manganese oxide cathode material.

The motor industry has taken a keen interest in lithium battery technology for possible use in electric cars. American car manufacturers Ford, General Motors and Chrysler are collaborating with the us government in their own us $1.5 billion lithium battery development programmes.