Some villages made their own disaster plan

While government authorities patted themselves over the successful evacuation of people from seaside areas before cyclone Phailin struck and took credit for minimising loss of lives, affected residents say such claims are not entirely correct. They say it is lessons learnt from the 1999 super cyclone, media hype and a bit of government support that saved lives.

Special relief commissioner of Odisha, Pradipta Mohapatra, claimed in the afternoon that only seven deaths have been reported because of Phailin (the toll was pegged at 18 later). He also underlined the hard work of the officials for such a low casualty.

However, around 120 village residents holed up in a two room primary school in Nuagrah village in Astarang block in Puri had a different version. “We lost seven lives in this panchayat in the 1999 storm. This time we took adequate precautions,” said Buddheshwar Kandi, an elderly resident.

Village residents also pointed out that Pahilin was not as fierce as the cyclone of 1999. The entire village had made an elaborate plan to protect itself from the cyclone. Residents also stocked a few buckets of water and some food.

Juna Patnaik said that entire village had information about Phailin three days before the event. Residents called a meeting and unanimously decided to take shelter in a concrete house of the village and not depend on the government.

The entire panchayat called meeting after news of cyclone Phailin was regularly flashed on television channels.

“We were expecting something bigger than storm of 1999. The media hype alarmed us,” residents said.

Construction of cyclone shelter houses on a large scale in the coastal belt of Odisha also helped in saving their lives. In the extreme end of Nuagarh panchayat, around 800 people took shelter in a cyclone shelter run by Red Cross Society.

Fishers at Nuagarh village were lamenting the sinking of their fishing vessels in the sea during the cyclone. Contractor of the vessels, Samant Chandra, said he sent numerous requests to the Coast Guard and district administration that the boats were stuck in the cyclone.

The 25-member fishing crew left for fishing a fortnight ago. They had no clue of the impending disaster. “We came to know about the cyclone only three days back,” John Bosco, another crew member said. 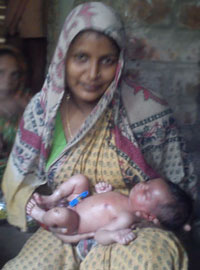 Crew members said the tidal waves were around 18 metre high. They ran out of diesel and waves damaged their vessels. Two of the three vessels sank. “We also lost Rs 1lakh worth fish caught in the sea,” they said. The fishing boat, Joy Anjama Putra, was rescued.

In Nuagarh, not all news was bad. Residents had rushed Lakshmi Kandi on Saturday morning to a local nursing home after she experienced labour pains.

Shibalabha Kandi, husband of Lakshmi Kandi said that the baby was born at 11.30 am. The couple have named their baby boy after Phailin. The boy has been named Phailin Kandi.