Firecrackers not up to the mark 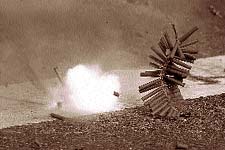 The researchers measured the noise levels under standard condition -- areas not having noise-reflecting surfaces within a 15-metre radius. Two gadgets, to gauge sound levels, were kept at a height of 1.3 metres and at a distance of four metres from the source of sound. Only one type of cracker -- the three sound bomb -- manufactured by Tamil Nadu-based Coronation Fireworks was found to be up to the mark.

Officials of the department of explosives defend themselves by saying that the crackers tested belong to last year's stock. "We have got noise monitoring instruments this year and now we are ensuring that the crackers meet the necessary requirements," says R H Bhalekar, chief controller of the department of explosives. According to Ved Prakash Mittal, president of the Delhi Outer Fireworks Dealers Association, steps such as using lesser explosives have been taken this year to ensure that the noise standards are met. "Only unauthorised companies will be the defaulters," he asserts. However, all the top brands were included in the list of culprits. The only way out, opines Oke, is to ban the manufacturing of crackers that make a sound above 65 decibels.