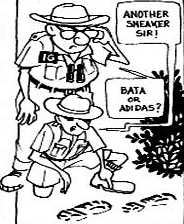 the wildlife bureaucracy of the ministry of environment and forests seems to have drawn the battle-lines with non-governmental organisations (ngos) over their conservation policies. Piqued by their continual attacks, the additional inspector-general (ig) of forests (wildlife), S C Dey, recently launched a diatribe against ngos working in the wildlife sector in an official meeting of the chief wildlife wardens of various states. Labelling them publicity-hungry, Dey reportedly asked his subordinates to put a check on the activities of ngos in various protected areas around the country. "Agencies and persons have taken up projects with aid from external sources, and some of their researchers are working in the protected areas without obtaining proper permission of the concerned state or the Centre," he reportedly stated in the meeting.

The statements have, expectedly, triggered off angry reactions from a number of ngos. Commenting on the additional ig's statements, Ashok Kumar from the Delhi-based Wildlife Protection Society of India, said, "I do admit that there are some bogus ngos that misuse their funds to gain unnecessary publicity and do not contribute anything of worth to the area of wildlife at all. His sweeping remarks are bound to hurt all those ngos that are committed to protecting India's wildlife."

Kumar also strongly refuted Dey's reported allegations regarding ngos that are working inside protected areas without proper authorisation of the state or the Central government. "Even tourists are not allowed within protected areas without proper authorisation and researchers have to seek the permission from a particular section which is headed by the ig himself."

Valmik Thapar of the Ranthambore Foundation, New Delhi, was more candid in his disapproval of Dey's statements. "If it is analysed well, the ngo movement over the last five years has done considerable work in wildlife protection. The only ones to have gained publicity by ngo work are the animals," he said. He brushed aside Dey's accusation that ngos were publicity-hungry saying that it was an outburst resulting from frustration and helplessness on the part of the government, as it has received a lot of flak for its inept conservation policies.

When contacted by Down To Earth over the telephone for his comments on the issue, Dey simply refused to say anything: "I have nothing to say about all this. I refuse to get into further controversy."