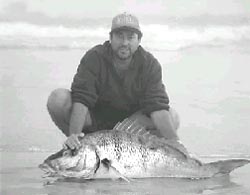 At least 20 species of South African fish are under serious threat, according to the country's environmental affairs and tourism minister, Valli Moosa. A decision to restrict catch quotas is on the anvil. Recently, the European Union slashed the North Sea cod quota by nearly half for 2001. It also agreed on a 10 per cent reduction in quotas for many other species. "The main reason is increased commercial fishing," said Horst Kleinschmidt, deputy director-general of the environment department in Cape Town. More than 500,000 South Africans are involved in commercial fishing, which poses a threat to the existence of several fish species.

Recent surveys indicate that overfishing is threatening the population of popular species such as rock cod, slinger and galjoen. Other fish on the endangered list include daggerhead, englishman, geelbek, musselcracker, poenskop, red steenbras, red stumpnose, roman, scotsman and white steenbras. "This list is going to increase in the future," warns Kleinschmidt. Environmental officials have urged the public to assist the environment department in its efforts to save South Africa's fish.