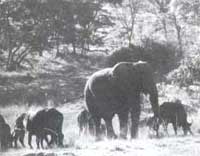 Too many elephants in Africa have generated a considerable debate and controversy among the various countries of the continent. It has also encouraged poachers and circus owners to capture elephants to make a quick-buck. Recently, 30 baby white elephants were captured from the Tuli private reserve in Botswana and bought to South Africa to prepare them for circuses and zoos. The baby elephants were kept in terrible conditions, tied to chains and subjected to training by the Indonesian mahout employed by a private concern called the African Games Service (AGS). The National Society for the Prevention of Cruelty to Animals lodged a criminal complaint against the AGS and sought the punishment of guilty. However, the owner of the Service was able to secure permission to keep the elephants till the case goes on trial in the court.

On the other hand, the Tuli reserve in Botswana refused to take back the baby elephants arguing that they are already suffering from an overpopulation of elephants, which is causing tremendous environmental damage in the region. Groups such as the World Wide Fund for Nature have called upon the governments of the African states to tackle the issue of overpopulation of elephants at the earliest. It fears that unless it is done on a war footing, it will be difficult to contain the practice of poaching and cruelty to elephants. Unfortunately, the governments grappling with the overpopulation of animals sometime find it convenient to turn a blind eye to the practice of poaching, as it is an easy way to solve the problem.