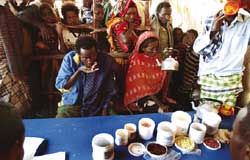 The South African government has put its health officials on high alert after an outbreak of xdr tb (extremely drug resistant tuberculosis). According to a who report, the disease is virtually untreatable with currently available drugs.

In a recent case, doctors at a Johannesburg hospital had to seek a court order to readmit an hiv -positive woman, also infected by the virulent disease. The woman had refused treatment and walked out of the hospital.

She is Johannesburg's first confirmed case of xdr tb. The disease has already killed 52 people in the east coast province of KwaZulu-Natal. The victims were also infected with hiv, and were receiving antiretroviral therapy.Though the victims were diagnosed as infected with the deadly tb strain, the disease claimed their lives within an average of 16 days after the diagnosis.

Following the outbreak, health experts from who, the Centers for Disease Control, usa, as well as regional and government health officials of South Africa held a two-day long meeting in Johannesburg to discuss strategies for tackling the deadly tb strain. Experts fear that the high rates of hiv and the large number of tb carriers in the country could hasten the spread of xdr tb. After the meeting, the government announced an immediate supply of drugs to treat all pulmonary infections, strengthen tb care and also prevent emergence of drug-resistance.

According to a who report, xdr tb strain is a multi-drug resistant variety of tb it is resistant to three or more of the six main classes of second-line drugs. Though prevalent in most parts of the world, the strain is most prevalent in central Asian countries of the former Soviet Union. However, it becomes a public health hazard in regions with high hiv rates. Paucity of health-care resources compounds the problem. As a preliminary measure, health-care experts have suggested quarantining the infected people.