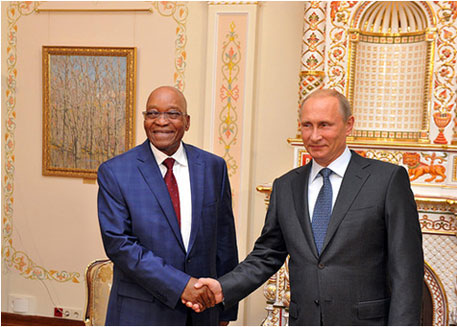 President Jacob G Zuma has come under severe criticism for South Africa's nuclear energy deal with Russia. The urgency and secrecy of the deal South Africa is looking to strike with Russia for the supply of up to eight nuclear power plants means “someone is up to no good”, said Democratic Alliance leader Helen Zille while referring to Zuma.

Zille said Zuma had spent his entire time in office trying to avoid facing charges of fraud and corruption. "The idea of up to a trillion rand changing hands on his say-so must be simply too good to pass over for a man with his track record. With his time at the helm running out, this Rosatom deal could be the ultimate windfall," she said.

The agreement to supply as many as eight nuclear plants, generating up to 9.6 GW of power, was announced on September 22, 2014, in separate but identical statements issued by South Africa's energy department and Russia's atomic energy agency Rosatom.

Zuma in his State of the Nation Address  on June 17, 2014, and in his Presidency Budget Vote speech  of July 23, 2014, had clearly stated his intention of going nuclear. He had said that the country needed to respond decisively to energy constraints in order to create a conducive environment for growth and that the situation called for a “radical transformation of the energy sector, to develop a sustainable energy mix that comprises coal, solar, wind, hydro, gas and nuclear energy.”

The president also announced the formation of the Energy Security Cabinet Sub-Committee that will oversee the development of the energy mix.

The South African government refuted all charges of President Jacob Zuma negotiating nuclear power agreements on his own. “Media reports that President Jacob Zuma has negotiated or will negotiate and conclude nuclear power agreements alone are incorrect. The President works with the cabinet on the matter,” a spokesperson of the Presidency said in a statement. The statement further added that on September 22, 2014, in Vienna, the Russian Federation and the Republic of South Africa had signed an Intergovernmental Agreement on Strategic Partnership and Cooperation in Nuclear Energy and Industry.