At a recent meeting, Northern environmentalists insisted on GATT taking a tougher stand on environmental issues. The South, however, maintained this would not solve the problem. 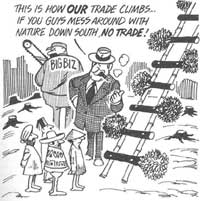 Developed countries are insisting on greening GATT (General Agreement on Tariffs and Trade) to minimise environmental degradation that could be caused by unshackled international trade in the post-Uruguay Round era. But this may result in barriers to trade with developing countries and also bring about a new range of protectionist measures, said Biswajit Dhar of India's National Working Group on Patent Laws.

In view of this development, he added, it would be optimistic to predict that developing countries would have greater access to global markets after the successful conclusion of the Uruguay Round of talks on GATT.

Dhar's assessment was shared by a large number of participants from developing countries, at a North-South conference held in Brussels from November 7, 1993. The three-day conference -- Striking A Green Deal -- was organised by a Brussels-based non-governmental organisation (NGO), the Environment and Development Resource Centre, with the help of some members of the European parliament and the governments of the Netherlands and Norway.
Though there was little disagreement about the need to make trade environmentally more sustainable, Southern participants categorically opposed the use of trade sanctions to improve global environment. "Environmental sustainability in trade must be achieved through the payment of ecological costs of commodities by consumers. It will be unfair to impose green conditionalities that could be misused to protect vested interests," said a statement made by the Centre for Science and Environment (CSE).

However, environmentalists in developed countries felt GATT must also ensure environmental fair play, as a substantial share of world trade is carried out by compromising environmental concerns. Northern conservationists fear the unshackling of trade in a post-Uruguay Round world will further increase environmental degradation, because developing countries largely trade their natural resources and the unfettering could make them neglect their environment.

These contentions, however, were disputed by B K Zutshi, Indian ambassador to GATT, who is also chairperson of the GATT contracting parties. Zutshi said GATT does not rule out environmental considerations in trade as long the measures taken are universally applicable and used for protecting the country's own environment. He also pointed out GATT had notified approximately 400 environment related regulations, though it was not an environmental organisation.

It was because of these reasons that the proposal to replace GATT with the Multilateral Trade Organisation (MTO) found favour with Northern environmentalists, though not all of them approved its inclusion in the Uruguay Round. According to Douglas Mulhall of the Environmental Protection Encouragement Agency in Hamburg, MTO will be useful only if NGOs are included.

This was also why many NGOs such as the World Wide Fund for Nature (WWF) wanted MTO to be delinked from the Uruguay Round package. WWF said, "A separate negotiating process for MTO, enabling full public consultation and participation should be established immediately" and a high-level trade and sustainable development council should be attached to it. And, Charles Arden-Clarke of WWF said, "MTO could contribute to the integration of trade, environment and development policies", if its functioning was transparent and accountable.

However, there was no unanimity among the Northern environmentalists over the exact structure of the institution to administer trade-related environment measures. Some participants even wanted a new UN body created for the purpose as MTO would always give priority to trade.

The Brussels conference also highlighted the growing Northern impatience with the Southern priority of poverty alleviation and national sovereignty. As Tom Spencer, British member of the European parliament, told Down To Earth, "Environmentalists in the North are aware poverty is a fundamental issue, but also feel that as poverty is such an important issue, it would be disastrous not to address the two issues (poverty and the environment) simultaneously."

Dhar challenged this, saying, "The environment has been undermined in developing countries largely because of diminishing value for their commodities. Unless this is reversed, the environment cannot be preserved." He also called for a review of the environmental impact of the forced integration of Southern economies by agencies like the International Monetary Fund (IMF) and the World Bank (WB). "Their policies had the twin effect of over-exploiting the South's natural resources," he said.

Maria Onestini of the Centro de Estudios Ambientales in Argentina, quoted studies done by the Economic Commission for Latin America and the Caribbean, which show that because of the economic adjustment policies of IMF and WB, natural resource exploitation has moved towards regions of high ecological fragility. Moreover, these policies have reduced public investment in water, sanitation and waste management and eroded food security. This has pushed the rural population to "areas of little productive capacity because of competition with advancing agricultural areas", said Onestini.


Ojijo Odhiambo of the Kenya Energy and Environment Organisation said his country's trade in the world market has increased, by volume, for most commodities, but real earnings have declined. Odhiambo echoed the position of many Southern groups by saying the biggest threat to the environment was the developed world's consumption pattern. NGOs from many developing countries pointed to the opposition within the European Community to the proposed carbon tax, as an example of rich consumers trying to violate the "polluter pays" principle.

In fact, several participants from Europe told Down To Earth that the urgency in pushing environmental conditionalities in trade also reflected the Northern environmentalists' failure to influence decision-makers and consumers in their own countries. As a result, most of the groups concerned with environmental protection in Europe and North America found it easier to direct their attention to the developing world. As more and more people in the North are becoming aware of the importance of Southern resources such as forests, the demand for better management of the environment in developing countries is growing.


This also seems to explain why many environmentalists want environmental sustainability to become an integral part of the proposed MTO. MTO will have a dispute settlement mechanism, which will give it the authority to make cross-sectoral retaliation. This means that if MTO regulations in one area are flouted, the reappraisal can be in another area.

These provisions worried NGOs and officials from developing countries. Odhiambo described it as a "tool of intimidation". "This whole mechanism is open to abuse," added the CSE representative. Gurdial Singh Nijar of the Malaysia-based Third World Network was more blunt: "The North wants to have its cake and eat it too."

Several participants from Europe agreed the provisions could be abused by business lobbies. And, said Zutshi, "Unless there are internationally accepted standards that take into account a country's specific priorities and environmental conditions, green conditionalities in trade will be unfair."

"Let us not forget there is a serious risk of legitimate environmental issues being exploited by protectionists for their own benefit. These concerns are heightened by the efforts of protectionist groups to draw well-intentioned environmental groups into ad hoc alliances," said Maria Cristina Hernandez, a member of Mexico's permanent mission to GATT.

Many of the Northern environmentalists also conceded that asking governments and international organisations to ensure environmentally sustainable trade was open to manipulation.

Putting environment on the top of the trading agenda at the cost of other Southern priorities is the "right thing" as far as the North is concerned. The impatience to go ahead with this was clear at Brussels. "I won't be surprised if the Northern business lobbies are the ones really fuelling this demand to neutralise whatever the South can gain in the Uruguay Round," said Gurmit Singh, an Asian NGO representative. Singh also pointed out that "Northern NGOs have already made up their mind".

There may not have been any clear evidence of this in Brussels. However, it was clear that the greening of international trade had become a priority for the North in the post-Uruguay Round world. More importantly, the conference revealed that developing countries have not yet prepared themselves to counter this threat, should it become real.