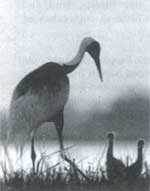 Sometimes, political differences work out in favour of environment. Scientists and environmentalists are planning to transform a 248-km-long, four- km-wide demilitarised zone between communist North Korea and capitalist South Korea into a nature reserve. The narrow strip running roughly along the 38th parallel, undisturbed by humans since the end of the 1950-53 Korean war, nestles wildlife unrivalled in other preserves in both Koreas.

The zone shelters half the world's remaining black- faced spoonbills. One-third of the world's Manchurian cranes feed in South Korea's Churwon valley and fly to this secluded zone to spend their nights. It also serves as a resting place for tiny sandpipers that stop and feed themselves during their 6,000-km flight from Siberia to Australia. Now conservationists are endeavouring to preserve the area. An international conference is being proposed to be held next year to bring scientists from both Koreas together to chalk out a plan for conserving the region.