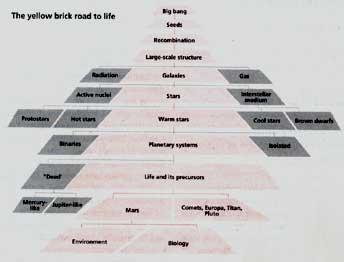 in the specialised world of modern science, it is difficult to find cosmologists, planetary scientists and microbiologists in the same room. But a host of disciplines gathered in Washington dc, recently to discuss the expansion of work on the origins of the universe, planetary systems and life itself. The goal was to convince the us government that further cuts in the National Aeronautics and Space Administration's (nasa) budget will hamper efforts to understand how life emerged (Science, Vol 274, No 5289).

The conference -- which will be followed this month by a space summit between the White House and the Congressional leaders -- will be the best chance for space scientists to escape from a severe funding squeeze. "Our productivity has been going up, but our budget has been coming down," says Wes Huntress, nasa space science chief, while reviewing how the agency's budget had fallen behind the pace of discovery. The president's science adviser, Jack Gibbons, calls it a "dilemma that is coming to a head".

To prepare for that event, Gibbons asked nasa, which in turn asked the National Research Council (nrc) to assemble researchers in fields ranging from astrophysics to geology and biochemistry to review nasa's scientific portfolio. So 40 scientists gathered for three days in the first week of November 1996 and came up with the idea of concentrating on the concept of origins -- of the galaxies, stars, planets and life -- as a thread tying together work in a range of disciplines. The suggestion for a way to connect the big bang with current molecular biology is called the yellow brick road to life.

"This is something that ten years ago would have fallen more in the realm of philosophy," says David Black, a planetary scientist who heads the Lunar and Planetary Institute in Houston. Black argues that the findings from nasa's Cosmic Background Explorer, the Hubble Space Telescope, and the Martian meteorites provide researchers with a chance to connect the Copernicus' view with Darwin's theory -- revolutionary theories in astronomy and biology respectively. "And it is not just a marketing thing. It makes scientific sense," he adds.

This might hamper research in a few fields, like work on interstellar medium would be on a lower priority, because it has an apparently small effect on the development of galaxies, stars and planets. There was reasonable scepticism about the discoveries fuelling a new era of science. "I don't see anything new here," says Norman Pace, a biochemist at the University of California, Berkeley. He sees the linkup with biology as a way for space scientists to attract political support. "I don't blame them," he adds. "If they can sell the programme that way, then great."

But the majority agreed that nasa's current priorities for space science are in tune with the search for origins. "There is a remarkable consensus that nasa's programme is roughly the right one," says Claude Canizares, workshop co-chair and a Massachusetts Institute of Technology x-ray astronomer.

It would be difficult for scientists who are used to defending their own turf to present a solid front to the politicians. "Each one of us has a stake in each other's fields," says Eugene Parker, a University of Chicago physicist,"but we tend to go full blast for our own speciality." Astrophysicist John Bahcall of the Institute of advanced study in Princeton, New Jersey, says that the researchers have little choice but to hang together. "We can judge for ourselves what is more interesting and important in science, or else someone less qualified will do it."