With the latest launch of another remote sensing satellite, Indian space scientists aim to carve out a niche in the world market for satellite data... and beat Uncle Sam to it 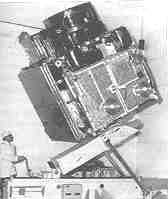 THE mood is upbeat at the Indian Space Research Organisation (ISRO) in Bangalore. Flushed with the successful launch Of IRS- IC, India's space technology marvel, ISRO'S scientists are now all set to invade the multi-billion dollar world market for satellite data by storm.

Billed as the most advanced remote sensing satellite, IRSAC lifted off to a majestic launch into clear skies aboard the Russian Molniya rocket from the Baikonur cosmodrome in Kazakhstan on December 28, 1995. With this launch, India has entered the exclusive group of nations armed with the capabilities to create the most sophisticated remote sensing satellites. Such has been the expertise of the Indian scientists that the launch was marked by clockwork precision with the 1,250 kg satellite entering the sun-synchronous orbit at 807 km from the surface of the earth. "It was a beautiful launch," said K Kasturirangan, chairperson, ISRO. The solar panels of the satellite also opened up within 93 seconds of the lift-off, sending clear signals to the Indian Space Research Organisation's Telemetry Tracking and Command station in Bangalore, which was monitoring the satellite's flight path.

The IRS-1C is expected to become operational any day now. What differentiates the indigenously built IRS-1C from the rest of the satellites, some already in orbit and others in various stages of development in different countries, is that it is packed with several features created to deliver data on a variety of subjects of topical interest.

Fitted with three panchromatic cameras which constitute the key equipment on board IRS- I C, the pictures to be provided will have a resolution of a remarkable 5.8 m, the highest available in the world today. In the layperson's terms, it would mean that the camera would detail an area confined within the range of 5.8 m. And that is not all. The camera is designed such that it can be angled to take pictures of a particular area in two positions, thus providing more illustrative data. Apart from the cameras, the satellite has the Linear Imaging Self Scanner (LISS-iii) and the Wide Field Sensor (WiFS). Further' it can record data about any part of the world in its onboard tape recorder and also relay the same to any ground station located, among other places, in Bangalore, Lucknow, Mauritius, Alaska and Oklahoma.

Many countries have evinced interest in buying the satellite data from India. Under a 10-year contract, the us-based EOSAT company will market worldwide the data received from the satellite. According to S Krishnamoorthy, director, public relations, ISRO, "India will hope to monetarily benefit from the access fee and the royalty on the sale of the satellite data."

India's satellite launch prowess has put into shade the capabilities of many other top-notch countries, especially the US and France. While providing itself with the latest in space technology, it has demonstrated that satellites can be built with low investment. For instance, the IRS-1C satellite was built with a minimal budget of Rs 100 crore (less than US $30 million), while the present French SPOT satellite is being made with a budget of over US $150 million. India is blessed with cheaper human-hours; besides, the cost of hardware in India is less expensive than in, say, the US. According to P P Prabhu, secretary, department of space (New Delhi), while Rs 50 crore was spent for building the satellite, the rest went towards meeting the cost for the launch.

Close on the heels of the Indian IRS - I C, the US is coming out with a satellite of its own to be launched in 1996-97 which will have a ground resolution of only one In. Will the advent of the US satellite create inroads into the Indian market for satellite data? "Not really," says Krishnamoorthy. He goes on to add that a resolution of one m would mean loads of data and the cost of processing it will be high. Ideally, ISRO would like to market its data in the Third World countries as they would not be able to afford the imageries delivered by the satellites belonging to the developed countries. K S Krishnan from ISRO, New Delhi, also believes that the US satellite will not make any dent in India's market.

Belonging to the second generation of satellites, IRS- 1 c scores over its predecessors, the IRS-IA and IRS-IB. its high resolution will lead to greater accuracy of maps of the earth. The satellite's remote sensing capabilities will generate data on crop acreage and yield estimation, drought monitoring and assessment, monitoring the occurrence of floods, land use, wasteland and urban mapping and also a survey of forest resources. Following its footsteps would be the IRS- I D - similar to IRS- 1 C - to be shot into space sometime in 1998. The Indian space programme has been planned in such a manner so as to launch one satellite every year for the next 10 years.