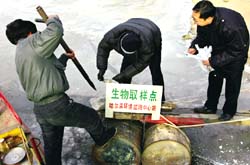 A blast at one of the plants of the China National Petroleum Corporation, China's largest energy company, at Jilin city on November 13, 2005, caused a massive chemical spill and endangered around nine million lives.

T he 3.8 million residents of Harbin city, China, were cut off from water supply for five days, as the river Songhua brought with itself 100 tonnes of known carcinogens benzene and nitro-benzene.

The plant managers and Jilin officials initially tried to cover it up. At first they announced to cut off water supplies for four days for regular maintenance work. Hundreds of thousands of people in towns and villages continued to use toxic water for more than a week. Though authorities were aware that benzene levels were high, they did not inform the people.

The government came clean and apologised after the (80km) slick had reached Harbin, contaminating drinking water. As an emergency measure, the public water supplies to Harbin were cut. The government scrambled to bring massive shipments of bottled water into the city to avoid a health crisis.

The toxic spill poses to be an international disaster, as the spill travelled over a 1,000 kms to cross over to Russia. The Songhua river flows into the Heilong, which becomes the Amur and flows into the Russian city of Khabarovsk. To avoid more international ire, China apologised to, and warned Russia of the approaching hazard and even established a hotline with Russia for constant communication. Russia has prepared for the arrival of the spill by fortifying water treatment facilities with 50 tonnes of activated carbon.