Officials, experts differ on cause of check-dam breach 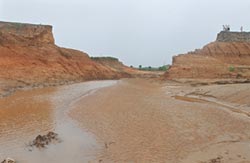 in the wee hours of July 10, the johad (earthen check-dam) in Rajasthan's Lava-ka-Baas village, which had irrigated at least seven villages during two successive droughts, burst. The water that flowed fiercely through the embankment saw the villagers' hopes being washed away. They had constructed the structure in 2001 in the face of strong objection by the government. The irrigation department and political leaders opposed the johad saying they had always questioned its safety and legality. The village, however, blames the shoddy johads built by the panchayats upstream of Lava-ka-Baas.

The johad was one of more than 7,000 check-dams built in the area with the guidance of Tarun Bharat Sangh (tbs), a voluntary body. Such structures, big and small, have transformed the region's economy over two decades.

Lava-ka-Baas is in Thanagazi tehsil of Alwar district. The tehsil office recorded 95 millimetres (mm) of rain from the night of July 9 to the next morning. Officials point out that the downpour was much heavier in the villages, and that most of it fell inside two hours. The water got accumulated in johads built upstream this summer by the Panchayat Samiti as part of drought-relief works. The sudden rise in the volume of water had a ripple effect on these check-dams, breaking them one after another. The water then gushed in torrents towards the Lava-ka-Baas johad and breached it straight down the middle.

The people of the village allege that the new johads were not structurally sound. Various officials, speaking on the condition of anonymity, concede that the check-dams were not up to the mark. Pramod Kumar Agrawal, executive engineer in the state irrigation department, however, maintains that the Lava-ka-Baas johad is illegal -- a violation of the Irrigation and Drainage Act of 1954. In 2001, the state government had even passed an order to pull down the johad . The Centre for Science and Environment, New Delhi, had taken a team of experts to study the structure. While the Lava-ka-Baas johad was found safe under normal conditions, some measures were suggested to ensure the structure's safety in case of unprecedented rainfall.

tbs and the villagers were trying to implement some of these measures on June 8, 2003. But irrigation department engineers complained to the police, saying the structure could not be altered as there was a writ petition pending on the matter in the Rajasthan High Court. tbs feels that if it had been allowed to strengthen the structure, there was every chance of its withstanding the July 10 deluge. The organisation also points out that the Samra Sagar dam, built in 2002 by the irrigation department in Pratapgarh tehsil at a cost of about Rs 1 crore, got breached right after the first monsoon showers on June 19.