Spoke in the wheel 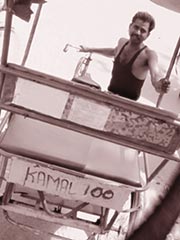 more than 80 per cent of Delhi's cycle-rickshaws are facing a dead end. This is because the Municipal Corporation of Delhi (mcd) reintroduced the licensing system for these non-polluting vehicles on March 8. The system was suspended two-and-a-half years ago on the directions of Prime Minister Atal Bihari Vajpayee. The stated objective of the reversion is to decongest the city's roads. But while transport experts warn that it would make the city's air more polluted, rickshaw-pullers allege the move is politically motivated.

"There are 73,072 licensed cycle-rickshaws in the city. Under the new system, we shall issue 99,000 licences. The entire exercise will be conducted afresh," reveals mcd commissioner Rakesh Mehta. At present, more than 500,000 cycle-rickshaws ply on Delhi's roads. About the fate of more than 400,000 cycle-rickshaws that would be left without a licence, Mehta says: "As per law, we will have to crush them." The parameters for issuing licences have not yet been decided.

But Geetam Tiwari, associate professor, Transport Research and Injury Prevention Programme, Indian Institute of Technology (Delhi), points out that licensing cycle-rickshaws will increase air pollution as people would switch to two and four-wheelers. "Traffic congestion in Delhi has to do with the lack of a devoted lane for cycle-rickshaws. Besides, the increasing number of motor vehicles also create congestion. But there is no check on them," she says.

Meanwhile, Rajendra Ravi, convenor of Lokayan, an organisation that has conducted research on rickshaw-pullers and prepared an action plan for them, alleges: "It (the move) is an attempt to harass the poor who are not supportive of the Bharatiya Janata Party (bjp), and appease the traders' lobby. Most rickshaw-pullers belong to the schedule caste/schedule tribe category or the Muslim community. They traditionally don't vote for the bjp."

Ravi further asserts: "Delhi's lieutenant governor, Vijai Kapoor, and bjp's former member of parliament from Chandni Chowk, Vijay Goel, are pressuring the mcd to reintroduce the licensing system. As Delhi doesn't have a full statehood status, the lieutenant governor can override the state government." Mehta concedes that the issue is "highly political", and that the Congress-controlled state government of Delhi "doesn't support it". But he refuses to elaborate on the matter.

Repeated attempts by Down To Earth to elicit a response on the matter from Kapoor and Goel proved futile.

The removal of cycle-rickshaws is ostensibly being undertaken as part of a plan to modernise Chandni Chowk, which is high on Goel's political agenda despite his switching over to the Sadar constituency for the coming general elections. But Bhagwan Jaiswal, general secretary of Delhi Rickshaw Pullers and Owners Protest Front, argues: "Does a rickshaw occupy more space than a car? Can you imagine Chandni Chowk without cycle-rickshaws? They are part of Old Delhi's lifestyle."