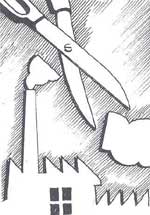 In a bid to make pollution control more efficient, the Central Pollution Control Board (CPCB) has proposed an all-India environment protection service, which will function as an enforcement agency. CPCB chairperson D K Biswas has also recommended recently that the board structure be replaced with an integrated authority possessing a broader mandate.

CPCB also wants the authority to act against polluting industries, including closing them down under section 5 of the Environmental Protection Act. However, the Union ministry of environment and forests is not keen to give it these powers. Ministry officials explain that closing down industries will mean putting a large number of people out of their jobs and, therefore, such a decision can only be taken by an elected state government. But the broader aspects of the CPCB proposals are still under debate, and the ministry is yet to come out with an official statement.

Meanwhile, CPCB has been pushing for basic changes in the state pollution control boards as well. In the proposed set-up, the responsibilities of the state boards would include general environmental protection, waste management, environmental auditing and promotion of clean technologies. This would be a radical change from the present scenario in which the state boards are only responsible for containing water and air pollution.