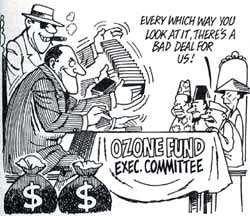 BICKERING between the North and the South has hindered the phasing out of ozone-depleting substances in the Third World. Although 7 of the 14 members of the Ozone Fund's executive committee are from developing countries, merely 300 tonnes of such substances were phased out in the Third World last year; in fact, most of the $250 million sanctioned by the Fund was lying unused.

At the committee's meeting in Montreal in the last week of March, Ken Newcombe, the head of the World Bank's global environmental operations, said it was embarrassing that the Bank was unable to spend the donor money as planned. This also upset the donor countries, especially the US, which even criticised the Bank and the United Nations Development Programme for allocating 20 per cent of the money for administrative costs.

Developing countries, however, said that the executive committee's narrow interpretation of the Ozone Protocol and its tight grip on the purse strings is slowing the process. They pointed out that projects that cost more than $500,000 have to be approved by the committee. India, which joined the executive committee this year, fears that although approximately $100 million is likely to be approved for its projects in the next 2 years, the money may actually be received much later. Besides, India's demand for the decentralisation of power to international implementing agencies was opposed by the US and France for fear of losing control over the process.

The domination of the Fund by a few industrialised countries was severely criticised at the meeting. A statement by Greenpeace, Friends of the Earth and the Centre for Science and Environment said: "While industrialised countries make statements about the need to protect the ozone layer, their companies profit through the Fund by their participation in the transfer of these chemicals to developing countries." New Scientist in its March editorial says, "The dates for phasing out ozone-destroying chemicals were chosen to allow manufacturers time to change their chemicals while making a profit."

Under a bilateral agreement, USA supplied 127 machines worth $735,000 to China, for the recovery and recharge of halon 1211 as a "pilot project". USA then requested the committee to deduct this amount from the contribution it is to make to the Fund, even though several countries had reservations about the effectiveness of the project. One UN official candidly remarked that if this project had not involved an industrialised country, it would have been termed a R&D project and summarily rejected.


Several developing countries have also accused USA and France of ignoring environmental considerations to promote their industrial interests. Most projects approved by the Fund entail switching to chemicals such as hydrochlorofluorocarbons (HCFCs) and hydrofluorocarbons (HFCs). As both will have to be phased out soon, another switch will be required by the developing countries, for which financial support may not be forthcoming. This may seriously affect the competitiveness of the Indian refrigeration industry.

Besides, the executive committee has shown little interest in funding activities to ensure the free flow of information. Environmental groups say that because developing countries are often unaware of all the options available, they depend upon the UN implementing agencies for the selection of technologies.

Until the Fund becomes independent of national commercial interests, the phasing out of ozone-depleting substances is likely to further slow down.