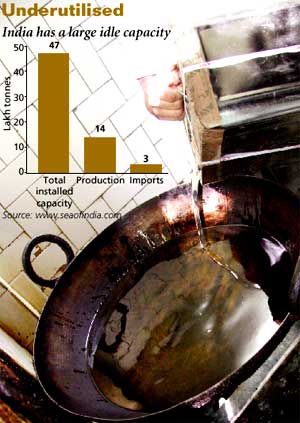 all Sri Lankan factories manufacturing edible oil for export to India have shut down production in protest against India's decision to restrict the product's duty-free import. Local officials, however, are hopeful of a settlement.

On June 4, India announced controls on vanaspati imports from Sri Lanka, saying only the state-run National Agricultural Cooperative Marketing Federation (nafed) could import duty-free oil, bakery shortening and margarine. The move came under pressure from Indian producers worried about the fact that the oil imported from Sri Lanka was much cheaper than theirs. Ironically, the dispute is between two sets of Indian producers -- one in India and the other in Sri Lanka.

The two countries had signed a free-trade agreement under which import of edible oil from Sri Lanka began in 2005.Most of the vanaspati oil is made from palm oil imported from Malaysia. Sri Lanka does not impose any duty on palm oil imports but India imposes an 80 per cent duty. To cash in on the difference, Indian manufacturers started setting up companies in Sri Lanka with local partners to make vanaspati oil for export to India. As of now, 10 such companies exist in the island nation, each with a capacity of 25,000 tonnes.

But the Indian decision has put paid to their expectations. Jagath Navaratne, the local partner of an Indian vanaspati plant in Sri Lanka, says there has been no production for more than a month. "The company is losing heavily...these are high investments of about us $3 million or more each."

Chairperson of the Sri Lankan Board of Investment, Lakshman Watawala, said the board has apprised Indian authorities of the unfairness of restricting vanaspati imports which affects bilateral free trade. "We are continuing discussions and hope to reach some resolution," he says. The issue was also discussed during bilateral talks held in Colombo in June on a Comprehensive Economic Partnership Agreement.

On its part, the Sri Lankan government "recently introduced a special levy of us $25 per tonne of crude edible oil imported from Malaysia", according to a statement by Sri Lanka's Industrial Technology Institute. Officials said Sri Lanka has also agreed not to issue any more licences to manufacture this commodity and moves are underway to cap imports at 250,000 tonnes.

The Indian Vanaspati Producers Association (ivpa) says that there is no justification for allowing imports of vanaspati, given the dismal state of the Indian industry and its large idle capacity (see graph: Underutilised). ivpa says that it does not want any protection but a level playing field.

It says that vegetable oil imports into Sri Lanka are duty free if the finished product (vanaspati) is exported. Several concessions, including full tax holiday for 3-12 years, duty-free imports of raw material during the lifetime of the project, duty-free import of capital goods, and 100 per cent ownership of assets by foreigners, have been given to these producers in Sri Lanka.

The vegetable oil imported from Sri Lanka costs at least 30 per cent less than that made in India, says B V Mehta of the Solvent Extractors' Association of India. Sri Lankan imports account for about 35 per cent of Indian consumption of Vanaspati ghee, he adds.

The south Indian states, which are closest to the island nation, have been flooded with Sri Lankan vanaspati, severely affecting their market. But under nafed control, imports will be equally distributed among states, according to the Vanaspati Manufacturers Association of India.

It had earlier asked for classifying vegetable oil as a 'negative commodity' in the free trade agreement. If the government can't put vanaspati imports in the list of negative items, the domestic industry should be allowed crude palm oil imports at 20 per cent duty as against the present duty of 80 per cent, argues the Vanaspati Consultative Committee, the apex body of the Indian vanaspati industry.

Meanwhile, nafed, the sole vanaspati importer, has invited bids from Sri Lankan manufacturers for its export to India at zero-duty. "The price quoted in the bids should be the prevailing price of imported vanaspati in Indian ports," a nafed official said. The step should help establish parity that the domestic industry is demanding.

With Sourav Mishra in Delhi