A flicker of brain signals received by a 'mind switch' and 10, disabled people can do a lot of handy work! 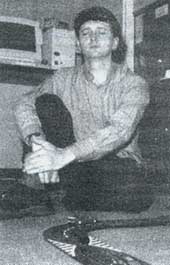 EVEN severely disabled people have reasons for hope with the unveiling of a new device in Australia recently. With the help of this device, disabled people can one day use their brain waves to operate stereos, lights, telephones and even scroll through a computer menu of more complex options. The device functions by picking up specific electrical patterns in the brain and using them to control a switch.

The 'mind switch' was developed by a team of researchers at the University of Technology in Sydney. After testing 120 volunteers, the researchers came to a conclusion that at 95 per cent of the population needs no training to operate the device. The users just have to close their eyes and relax for a short while for the change in brain waves to be picked up.

Les Kirkup, the physicist who developed the device says, "Its has been known for over 20 years that there are changes in the alpha wave (a component of the expend) when you relax but no one thought you could use it. It's been like gold lying on the surface that people have walked over."

The signal was discovered by the team two years ago. it emanated from the temporal and occipital lobes at the back and the base of the brain, and lies in the frequency range of eight to 13 hertz. The major stumbling block for the project has been to reliably pick up changes in the signal, amplify them and use them to control a switch. The signal is harnessed via electrodes attached to the scalp. The signals strength fluctuates between five to 15 microvolts and has to be amplified about 150,000 times before it triggers a switch. The researchers believe they have found a second brain signal at five to eight hertz in the theta part of the EEG spectrum which can also be used as a switch. People could accomplish more complex tasks with the help of two switches (New Scientist, Vol 130, No 2028).