How soot can help surfaces repel both oil and water 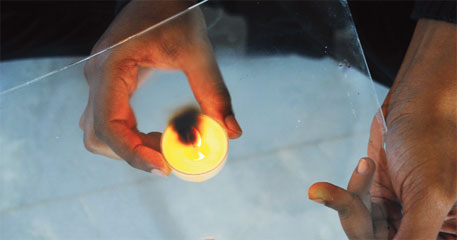 XU DENG, a doctorate student at Max Planck Institute for Polymer Research in Mainz, Germany, experienced a eureka moment while watching a video in which they showed how water could roll off layers of soot coated on paper. His team had been looking for something similar, a magic material that would ward off both water and oil, and pave the way for self-cleaning glass.

This kind of self-purging glass could be used in making goggles, touchscreens, windows and other products. So, eyeglasses would never again need to be cleaned, and dirty windscreens would become a thing of the past.

Until now, scientists have only succeeded in making either oil-resistant (superoleophobic) or water-resistant (superhydrophobic) glass. Max Planck researchers alongwith those from Technical University Darmstadt in Germany have now made a glass that repels both. “Superhydrophobic surfaces lose their self-cleaning properties after sometime because the interstitial spaces get filled with organic debris or dust from the surroundings,” says Hans-Jurgen Butt, one of the authors.

The team coated a glass slide with soot by holding it over a candle flame so that soot particles, which measure around 40 nanometres in diameter, formed a sponge-like structure on the glass. But since such a layer is weak and wears off as droplets roll, the team applied an additional coating of silica. “There are two reasons why we chose silica. First, to make the coating mechanically stronger. Second, to be able to coat it afterwards with fluorosilane—fluorinated silicon compound which makes the surface water and oil repellent, like a non-stick frying pan,” says Butt. But in surfaces coated with the silicon compound, water and oil mostly roll around in the form of drops, he adds. “In our experiment it is the structure of the coating what makes the glass water and oil repellent,” Butt notes. The structure of the layer resembles a sponge-like labyrinth of completely unordered pores, which is made up of tiny spheres. “So the surfaces cannot be wet even by low-viscosity oils,” he notes. This is because the liquids that wet even fluorinated surfaces would have to be pressed over these spheres, which measure around 40 nanometres, in order to form a film on the surface. This requires too much energy. At last the glass is baked at 600°C to make the soot transparent. The study was published in the December 1 issue of Science.

On the production costs he notes, “The method we employed is expensive. But all steps can be improved to make it cheaper.” Reviewing the study James McGuire, professor of physics and engineering physics at Tulane University in the US, says the coating is promising. “It can easily be used to make windows that repel a mixture of water, oil and other molecules and as protective shields for use on oil rigs that suffer blowouts in rough weather.” But it needs to be seen how long they will last and whether they have possible toxic effects.