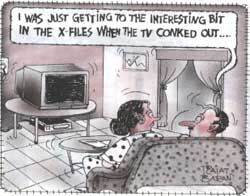 RESEARCHERS at the University of California, Berkeley, USA, say they have come across something unprecedented in their 30 years of study of the Universe. A burst of radiation from a star smashed into the Earth's uppermost atmosphere on August 27. The radiation, they say, had enough energy to power civilisation for a billion years. The most powerful-ever wave of energy from beyond the Sun caused at least two satellites to shut down briefly. Even though the wave of energy made a powerful beginning, it reached the Earth's surface at a strength equal to only a single dental x-ray. "We've been monitoring things like this for 30 years and we've never seen anything like this before," said Kevin Hurley, a research physicist at the university.

Just like the Sun's effects on Earth during the day time, the burst of gamma and x-ray radiation struck the Earth over the Pacific Ocean and it was so powerful that it temporarily ionised the upper atmosphere, said Hurley.

Five scientific satellites in orbit of the Earth, another approaching an asteroid and one near the orbit of Jupiter, all detected the massive eruption. Two satellites were forced to shut down in order to protect their electronic systems. Most of the energy was absorbed by the upper atmosphere and only a minuscule amount of radiation could reach the Earth's surface. According to Hurley, it posed no hazard to life.

The eruption happened some 20,000 light years away and came from a neutron star called 'SGR 1900+14', in the constellation Aquila. The intensity of the energy released was so high that it made the astronomers admit it was rare for such a distant stellar explosion to have any effect on the Earth. They estimated that if the energy was captured and put to use, it could power all of the Earth's energy needs for a billion billion years - that is one billion periods of one billion years. "If we could harness this energy, we would have enough power to power every city, every village, every light bulb until the end of the Universe and far beyond," said Hurley. Robert Duncan of the University of Texas, Austin, believes the energy burst probably occurred when the magnetic field ripped apart from a thick metal crust of the star, releasing an immense eruption of x-rays and gamma rays.