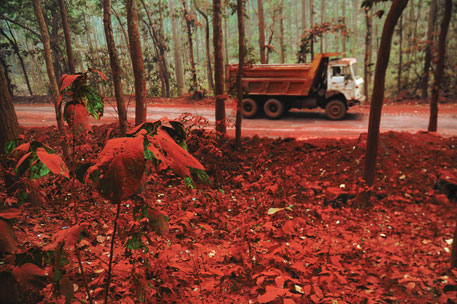 Amid rising cases of illegal mining, states across the country are now turning to real-time monitoring of mineral produced, transported and received by industries.

The pioneer in this real-time monitoring is Odisha. The state’s steel and mines department has put in place a 24*7 system called Integrated Mines and Mineral Management System or i3MS. The system was put in the public domain last year. It not just monitors the transporting vehicles but also keeps a track of the ore mining process from scratch.

As soon as the mine lessees and mine-ore procuring company apply for online permit, the system starts with automated checking of environmental, pollution, forest, surface right clearance of minimum production quantity, mining plan validity, lease working status and license validity of the applicant.

After the final approval from the deputy director of mines office has been secured after necessary processing, the system generates a transit permit. This permit has a unique number, details of mineral to be dispatched and its validity period. It does away with the need of paperwork. 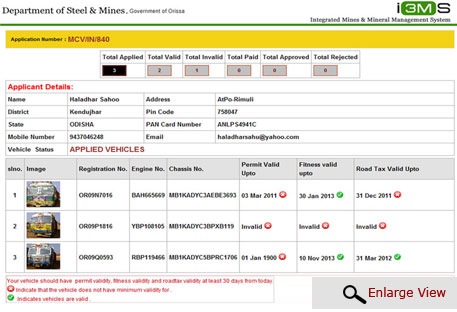 “All mine owners do not possess a truck for transport. Hence demanding a single truck owner to install a GPS system was unviable. GPS is also very costly,” explains Nanu Pany, chief executive officer of CSM Technology, a private-company which is in charge of executing the system.

He points out that there are nearly 600 mining companies and 3,400 registered traders and users of ore in the state. Moreover, once the e-pass is generated, the information is also communicated over Internet to the check gate. The gate has bar code readers and information is verified there.

The ore-producing companies, Railways and ports also posses a bar code reader. The e-pass is swiped at the gates of these as well and the information is sent via Internet closing the verification loop. “The state is in talks to integrate i3MS system with freight operating information system of the Railways which is used across the country to book indent for mineral transportation. Usually, the weight of mineral carried by the Railways’ is sent to the mining circle office after three months.

The railways have no information of the legality of the mineral since the indent is booked by the seller. Therefore, it was decided that i3MS will share the permit information in real-time to enable Railways to issue indent,” says A R Shaikh of CSM Technology. The ports in Odisha are integrated with i3MS system.

At present the i3MS system has information of about 600 leases and 4,200 licenses. The information was collected by the state in three months. The government had issued a notification asking all mine-ore procuring companies to fetch relevant data to form the database. It was verified by mine circle officers and then locked in the system.

“The system is transparent and fast. Previously, issuance of mine license would take 3 to 4 months but now it takes only 10 days,” says Pany.

Odisha's department of steel and mines had slapped a fine of Rs 67,900 crore on companies operating 103 mines in the Koira and Joda mining circles of Sundargarh and Keonjhar districts, respectively for mining more mineral than permitted in early November.

Other states are also taking similar initiatives. Andhra Pradesh Mineral Development Corporation Ltd. has launched a system to track mine trucks. It uses GPS to keep tab of trucks speed, direction and location. The system is currently not in public domain and has been implemented for Mangampeda mine of Andhra Pradesh Mineral Development Corporation Ltd.

“Mine owners hold the responsibility of fixing a GPS in mine trucks. We have outsourced the software through proper quotations. It is not mandatory to monitor mine ore transport trucks but we are doing it for efficient management. For example, if mine A material needs to be dumped in A ground and if the truck owners dump it elsewhere or if the truck owner carrying mine ore complains of truck breakdown, we can  check the veracity of such claims, ” says Vijay Sarathi of Andhra Pradesh Mineral Development Corporation.

Goa also has a vessel tracking system. The system displays the status of the vessel on a real-time basis.
“The system displays the route of the vessel, the number of km it has travelled and all. The state has made this mandatory. It costs around Rs 16,500. There is annual maintenance charge of Rs 6,500. The device must have a Google license. It is just in the size of a blackberry mobile's battery,” says Parag Nagarcenkar, assistant director at directorate of mines and geology of Goa.

“If the vehicle is stolen or found moving elsewhere then with the help of this device we can even stop it using a code transmission. One part of the device is connected with the ignition engine of the vehicle which makes this possible,” he adds.

Mining has been banned in Goa for over two months now, after the Supreme Court, hearing a petition filed by activist lawyer Prashant Bhushan, announced a probe by a central empowered committee.

The petition follows the revelation of Rs 35,000 crore illegal mining exposed by a judicial commission headed by Justice M B Shah.