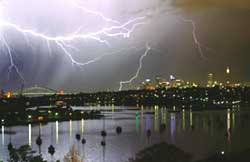 "Sophisticated imaging techniques like scanning electron microscopy uncovered sharp depressions, membrane folding and granular texture at sperm head surfaces due to lead exposure," says Amal Roy Chowdhury, who led the researchers. Lead has long been a prime suspect in inducing male infertility among occupationally exposed people. The findings appeared in a recent issue of the Indian Journal of Physiology and Pharmacology (Vol 49, No 2).

For the study, the scientists randomly chose 80 lead acid battery factory workers aged 31-45 years in Kolkata. They were divided into two groups: one comprising 30 workers with daily exposure of eight hours over 7-10 years (low exposure) and the other comprising 50 workers with eight hours of daily exposure over 10-15 years (high exposure). They were compared with 40 non-occupationally exposed control subjects.

Samples were collected from all subjects and analysed for sperm density, total count, motility, semen volume and viscosity and structural deformities as per the protocol recommended by the World Health Organization. One part of the semen samples and 2 ml of morning, fasting, and venous blood were stored at -20 c in vials for measuring the lead content.

Results showed that lead reduced viscosity and volume of semen in both the exposed groups compared to controls. "The high-exposed group had different types of abnormal sperm with structural abnormalities in head and tail of sperm," says Roy Chowdhury. Semen lead was higher in infertile men than in the control group. The low-exposed group showed 1.9 fold increase in blood lead levels while the increase was 3.9 fold in high-exposed group.

"Lead in semen dropped the level of antioxidants, increasing breakdown of sperm membrane lipid by hydrogen peroxide and leading to loss of sperm membrane integrity," says Roy Chowdhury. Influx and outflow of sodium and potassium ions play a vital role in sperm motility. But lead replaces sodium and disrupts the activity of certain enzymes like atp ase leading to loss of sperm motility required for fertilisation, he adds.

Lead affects the secretion of two accessory sexual glands -- seminal vesicles and prostate. It also reduces the sperm protein and causes fragmentation of sperm dna, which resides in sperm head. "As sperm head dna transmits the genetic message from one generation to another, such breakage of dna for longer duration may pass on wrong genetic information to the next generation," warns Roy Chowdhury.