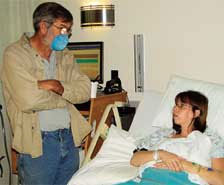 From  boils to postsurgical wound infection, there is only one genus of bacteria that keeps itself busy. This microbe resides on the skin and nose of about one-third of the world’s healthy people. Simple boils can be treated without antibiotics but infections that lead to blood poisoning need attention. The catch here is that the drug-resistant types are spreading fast.

Hajo Grundmann from the National Institute for Public Health and the Environment at Bilthoven in the Netherlands and colleagues investigated how far this microbe has travelled between hospitals within Europe. Healthcare networks are the microbe’s most common source and transportation courtesy goes to human-to-human contact.


The team analyzed data collected by hospital laboratories between September 2006 and February 2007. A total 357 laboratories serving 450 hospitals in 26 European countries collected 2,890 isolates from infected patients. The isolates consisted of drug-resistant and drug-susceptible types.

Genetic typing showed the microbe was widely distributed in Europe. The drug-susceptible types were genetically more diverse than the drug-resistant strains. Although low in diversity, the resistant varieties differed considerably from each other between countries and the strains occurred in definite geographical clusters. “This indicates that the resistant types have been spread by patients who carry the infection and are admitted and re-admitted to hospitals. Control efforts aimed at interrupting this spread within and between hospitals may be feasible and ultimately successful, said the researchers in the study published in the January 12 issue of PLoS Medicine.

A 2007 report estimated the total direct costs of such infections borne by US hospitals was US$17 billion.