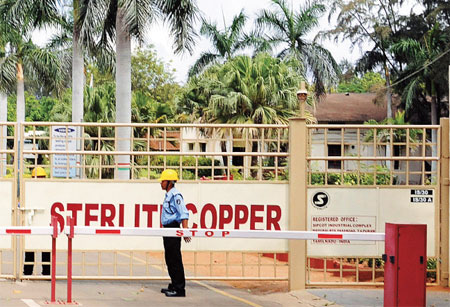 THE Supreme Court has asked Sterlite Industries, a subsidiary of Vedanta Resources, to pay Rs 100 crore as compensation for polluting water, soil and air of Tamil Nadu’s port city Tuticorin for two decades. However, it has overruled a 2010 order by the Madras High Court to shut down the polluting copper smelter completely. The ruling came just a week after a suspected toxic gas leak from the plant on March 23 made people living in its vicinity sick.

Several hundreds of residents complained of swollen eyes and falling short of breath and were rushed to hospitals. A 35-year-old migrant from Bihar, who worked in the plant, succumbed to gas poisoning two days later. The leak angered residents, who on March 28 staged protests under the banner of the Anti Sterlite Struggle Committee (ASSC). The district administration rushed to inspect the plant, following which, on March 30, the Tamil Nadu Pollution Control Board (TNPCB) asked the plant authorities to close the smelter. The Tamil Nadu Electricity Board has also severed electricity connection to the plant.

The 400,000-tonne-capacity smelting plant of Sterilte Industries, considered the cheapest in the world, has been at the centre of controversy since it commenced operations. Similar gas leaks have been recorded in the past.

In 2010, Tuticorin residents, including Marumalarchi Dravida Munnetra Kazhagam (MDMK) chief Gopalaswamy Vaiko, had filed a petition in the Madras High Court and accused Sterlite of ignoring the concerns of residents, especially the fishing community who were losing livelihood because of pollution caused by the plant. The court had issued the closure order in response to this petition. But Sterlite obtained a stay from the Supreme Court and continued to operate. The apex court, however, set up a committee comprising officials from TNPCB and the Central Pollution Control Board to investigate the plant’s environmental impact. It has slapped the compensation of Rs 100 crore based on the committee’s report. It has ordered to put the money in a fixed deposit for at least five years, and spend the interest on suitable measures for improving Tuticorin’s environment.

Residents of Tuticorin say given the financial strength of the company the Rs 100 crore fine would not act as a deterrent. “Look at the way the stock market reacted to the Supreme Court order,” says Fatima Babu, ASSC member. The value of Sterlite’s shares went up by 4 per cent on April 2, minutes after the Supreme Court judgement was announced. The company issued a statement, saying the Supreme Court noted that its closure would make a dent in the government revenue from copper and hence allowed it to operate.

If the apex court’s orders are followed, Sterlite may have to relocate its plant. The court stated that the Gulf of Mannar is an eco-sensitive marine national park and the Environment (Protection) Rules of 1986 prohibit setting up industries within and around it. The court observed that the plant’s copper smelter was situated 6 km from Vanthivu, 7 km from Kasuwar and 15 km from Karaichalli and Villanguchalli which are part of the 21 islands in the Gulf of Mannar. Appropriate steps may have to be taken by all concerned for shifting the industry from the SIPCOT Industrial Complex, states the ruling.

Vaiko and several petitioners wonder if the apex court wants to relocate the plant, why it has allowed the plant to operate from the same location.