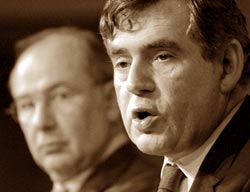 the World Bank and the International Monetary Fund (imf) have rejected a proposal by the uk to increase debt relief to Africa for helping it achieve its Millennium Development Goal (mdg) targets. At the annual meeting of the two bodies on October 2, 2004, Gordon Brown, uk's chancellor of the exchequer, proposed the idea and said his country would contribute 100 million pounds per year to cancel 10 per cent of the outstanding debt of 32 mostly African countries to the World Bank and the African Development Bank. But his G-7 counterparts did not agree. The meeting concluded with a mere extension of the criticised Highly Indebted Poor Countries (hipc) debt relief initiative. This was the first debt relief initiative led by the World Bank and imf in 1996. Reforms were made to the hipc package in 1999 in view of its slow implementation but even in 2002, Africa was still left with an overall debt burden of us $295 billion. This figure was only 1.5 per cent lower than its average debt burden from 1990 to 1996.

Brown emphasised at the meeting that Africa would not achieve its mdg targets until a century and a half past the target of 2015 without a radically different approach to debt relief. The same view was expressed in a report released by the United Nations Conference on Trade and Development (unctad) on September 30, 2004, Economic Development in Africa Debt sustainability: Oasis or Mirage?. The unctad report says several countries would still possess an unsustainable debt burden after graduating from the hipc package and suggests redefining debt sustainability.

Brown had proposed to finance his debt relief plan by using the imf's gold reserves but failed to get support for this at the meeting. He suggested that re-evaluating imf 's gold reserves from their book value of us $8.1 billion to the more market realistic value of us $45 billion could free up the money needed to cancel debts. The meeting also didn't achieve progress in talks on providing debt relief for all debt-ridden poor countries. Discussions were dominated by relief for just one country -- Iraq.