Stink in the northeast 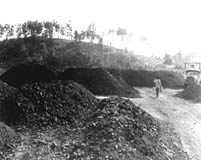 there has been an alarming increase of air and water pollution due to unscientific coal mining in Meghalaya -- once known for its natural beauty and pollution-free atmosphere. A recent study by the Meghalaya Pollution Control Board (mpcb) reveals that private coal mining in Jaintial Hill district near Shillong is gradually destroying the environment.

The report says that due to an increase in the air pollution level, the weather has become unusually warm in the coal belt of the state. Coal mining is in progress in Bapung, Lad-rymbai, Klehriat in the Jaintia Hill district located near the national highway which passes through Meghalaya. It is often noticed that commuters block their noses to avoid inhailing the dust and polluted air.

Being a tribal state, Meghalaya's coal-rich areas and forests are in the hands of private owners. The state government has no control in these areas. The mining is done through open cast method and through rat hole mining -- where holes are made in the hills in search of coal and wherever coal is found, mining starts underneath the upper layer of soil.

Such methods of unscientific mining is gradually destroying the forests causing soil erosion. Mining activity has polluted air and water in large areas. mpcb conducted a study on the water supply in the region concluded that both surface and ground water in the coal belt contained high proportion of sulphuric acid and other hazardous chemicals. The Jaintia Hill coal deposits are known for high concentration of sulphide minerals. Officials of the mpcb found highly polluted water near the coal dumps.

The study by the state pollution board also examined the air pollution level. The report says that the average concentration of Suspended Particular Matter, Sulpher dioxide and Oxides of Nitrogen content in the coal belt locality are 200, 6.5 and 25.5. respectively. Air pollution is also due to coal storages which have affected not only the miners but also the people living nearby. Doctors at the Bapung and Klehriat Public Health Centres say that a majority of their patients suffer from asthma, severe cough and other respiratory tract ailments. While the mine owners are minting money, the labourers live a miserable life and the local people die a slow death.

Order: Order of the National Green Tribunal regarding illegal coal mining activity being carried out in Meghalaya, 04/04/2014