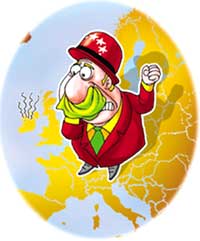 Ireland is facing the wrath of the European Commission (ec), the eu executive, on many environmental issues. On April 11, 2005, the ec announced that following complaints of bad smells from Irish sewage plants, it has decided to sue the country in the European Court of Justice for not enacting environmental laws.

"The case arose from complaints about smells from certain Irish treatment plants, including the largest one in Dublin. Legislation promised by the Irish government to better regulate the management of such plants has not yet materialised," said the ec statement. The ec said it will also take Ireland to court for wrongly implementing eu rules on environmental impact assessment. It will also issue a warning letter to the country for not complying with a European Court ruling on substances that harm the ozone layer.