Swedish retail clothing giant H&M was ripped apart by netizens for stealing the work of US artist Tori LaConsay and reproducing it on a range of its household items, including pillowcases, towels and doormats.

According to BBC, LaConsay had painted a billboard, saying, “You look nice today”, in 2008 to make her tight-knit neighbourhoods in East Atlanta feel good about themselves.

After realising recently that H&M has reproduced the design—same words, same font and same cutesy heart—Tori and her friends contacted the company. 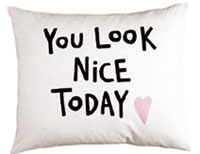 Initially, H&M denied foul play, both in its response to the accusations posted on its Facebook wall and in its email reply to Tori’s claim. But following growing outrage, H&M tweeted an apology saying it is in direct contact with the artist to resolve the matter. Since the complaint came to light, it has removed “You Look Nice Today” items from sale on its website.