Storm in the coffee cup

The coffee borer having developed resistance to the insecticide endosulphan, is threatening coffee plantations throughout the world 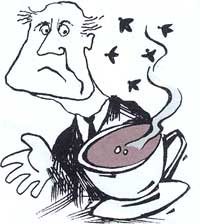 A BEETLE known as tpe coffee borer (Hypothenemus hampei) is the major insect pest bothering the coffee growers of the world today. Together with some other close relatives, the creature leads what -by normal standards -can be called a strange life. The cycle begins and ends with a single female boring into an individual coffee berry where she lays her eggs. Approximately 90 per cent of the hatchlings turn out to be females. The remaining 10 per cent are small and flightless males who stay put permanently in the berry. These males mate with their sisters. The latter then proceed to lay eggs in other coffee berries. Thus, in addition to a highly female-biased sex ratio, there is also a high degree of inbreeding in the coffee berry borer (Proceedings of the us National Academy of Sciences, Vol 92, 1995).

Recent studies conducted by L O Brun, at the French Institute for Scientific Research and Development in the South Pacific island of New Caledonia throws light on the relation- ship between these strange features and the success of the insect as a pest. The research was motivated by the observa- tion that insect strains resistant to what is the most effective insecticide used hitherto, endosulfan, had begun to emerge.

A genetic mutation was responsible for the resistance to endosulfan. Something strange was observed when the gene responsible for the mutation was followed from one generation to the next. The use of the word 'strange' is juxtaposed with the fact that all outward appearances of the reproductive system of the pest remain normal. Females mated before laying eggs, both her sons and daughters were diploid which means they got the usual (equal) com- plement of genes from each parent. However, the sons seemed to switch off all the genes that they got from their father. In effect, therefore, males were haploid arid carried only the genes of their mother. This phenomenon, called functional haplo-diploidy, bears important consequences the spread 0( resistance to insecticides.

Most gene mutations tend to behave in what is called a recessive fashion, when they are present along with a normal copy of the gene. This means that an individual who has one normal copy and one mutated copy is still normal: he or she acts as though there were no mutated versions at all. An individual carries a mutated gene but does not express it. Therefore, even if the mutated copy could lead to insecticide resistance, the presence of the normal copy ensures that the insect remains susceptible; resistance will not spread. This argument obviously rests on the assumption that every gene is present in two copies. But the strange genetics of the coffee borer implies that a newly arisen mutation that renders the pest insecticide-resistant, will spread very rapidly because the mutation is imme- diately exposed in all males who carry it. On top of this, the close degree of inbreeding ensures that the degree of genetic similarity between one insect and another, keeps increasing rapidly. Therefore, resistant females too will start cropping up sooner than expected.

The fear was, and continues to be, that if the spread of such resistance in New Caledonia is left unchecked, it could prove a threat to the coffee industry all over the world. Coffee lovers the world over will be keeping their fingers crossed.