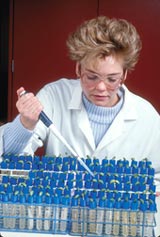 Monsanto Corporation has been granted exclusive monopoly over all genetically transformed soyabean varieties. The Munich-based European Patent Office (epo) upheld a patent held by Monsanto on transgenic research on soyabean.

The patent covers the process that describes genetic transformation of plants and soyabean seeds as well as tissues obtained by such processes. The epo, however, rejected the company's demands to extend the scope of the patent to all plants. Interestingly, Monsanto had vigorously opposed the patent until it bought Agracetus -- the original patent holder -- in 1996. Suman Sahai, president of India's Delhi-based Gene Campaign, feels the patent should not have been upheld because the genetic modification process described for soyabean was insufficient to allow anyone from the same discipline to replicate the procedure -- a basic prerequisite.